Kevin “Gambling Pays” Allen took down the GukPT Grand Final for £158,700 after starting the final day with the smallest chip stack of the 13 remaining players. 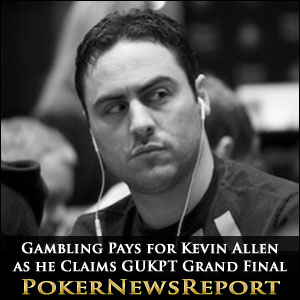 Kevin “Gambling Pays” Allen took down the GukPT Grand Final for £158,700 after starting the final day with the smallest chip stack of the 13 remaining players.

132 players returned for Day 2 – during which the 28-player money bubble was burst when Mitch Johnson eliminated Khoa Nguyen A♣ J♦ > K♣ Q♣ – and, after ten levels of play, just thirteen players remained in the GukPT Grand Final Main Event headed by Richard Kellett.

Kevin Allen enjoyed the type of start that all short-stacked players dream of. Doubling up in the first hand K♦ J♦ > A♥ Q♥ against Paul Hardwidge, Allen then found A♦ A♣ to double up again against Pratik Ghatge (Q♥ Q♠). Paul Hardwidge was the first player to be eliminated on Day 3 when his A♦ 10♥ failed to improve past Rudolf Fourie´s J♣ J♦, and Nicholas Meng also hit the rail before the end of the first level.

Sam Grafton´s fortunes went in the opposite direction – losing a stack of his chips to Richard Kellett when Kellett´s A♥ 7♥ hit a backdoor Flush – and then getting his last chips in with K♠ K♦ against Matt Davenport´s A♠ 10♦ and seeing the A♥ dealt on the flop. Zimnan Ziyard joined Grafton on the rail soon after, when he shoved with K♠ 6♣ and ran into Scott Margerson´s J♥ J♣, and the final table of nine was set.

The final table began with blinds at 8,000/16,000 (ante 2,000) and Pratik Ghatge was unlucky to be the first player to bust when his shove with A♠ K♠ was called by Thomas Bichon (K♥ K♦), whose Kings held. Rudolf Fourie reduced Richard Kellett´s lead at the top when doubling up A♥ A♦ > 10♠ 10♦, and Matt Davenport improved his position when his A♦ K♦ out-kicked Bichon´s A♠ Q♦ after both players had paired their Aces.

A further three levels passed without any eliminations, until Kevin Allen moved all-in with K♥ 10♥ on a flop of Q♣ 2♥ A♥ and was called by Will Kassouf (Q♥ 9♥). Kassouf was ahead with his paired Queen, but the 8♥ on the River gave Kevin Allen a better flush and Kassouf was eliminated in eighth place.

Allen Moves Up – Chased by Davenport

With his enhanced chip stack, Kevin Allen started applying more pressure in valuable pots. A post-flop three-bet saw him take 200,000 chips from Richard Kellett and move into the chip lead; and, after Rudolf Fourie bust Thomas Bichon in seventh place Q♥ Q♣ > A♥ K♠, Allen again took a massive pot against Kellett with two pairs (Q♦ 9♣) to increase his chip stack to 2.8 million.

Richard Kellett eventually bust in sixth after running his A♣ K♦ into Matt Davenport´s pocket Aces, and Davenport got his third KO of the day when eliminating Scott Margerson in fifth J♦ 10♣ > K♠ 10♥ (Davenport hit a Club Flush on the Turn) to move into second place behind Kevin Allen as the tournament went four-handed.

The game had moved into level 26 (blinds 25,000/50,000 – ante 6,000) before the next player was to depart the final table, and it was Ben Jackson who finished in fourth after moving all-in with A♠ Q♦ and running into Matt Davenport´s pocket Kings. Matt Davenport now had a stack approaching four million chips – more than half the chips in play – but double-ups by Kevin Allen A♦ K♥ > J♦ 8♣ and Rudolf Fourie Q♥ 5♥ (two pairs) > A♥ 6♣ evened up the chip stacks.

The first big pot of the heads-up saw Kevin Allen take an advantage in the climax of the GukPT Grand Final – his pocket Tens narrowly holding against Rudolf Fourie´s A♦ 9♥ – and, throughout the remainder of the level, the respective chip stacks stayed pretty much the same – with few hands seeing the flop, and none at all going to showdown.

A post-Turn shove into a pot already containing 1.6 million at the start of Level 31 forced Rudolf Fourie to fold, and gave Kevin Allen a 2:1 chip advantage, and the final pot of the GukPT Grand Final came just a few hands later – Fourie shoving with J♠ 8♠ and Allen making the call with K♦ Q♠.

The flop of 5♦ 7♠ 9♠ gave Rudolf Fourie plenty of outs for a straight and flush draw, but he missed them all on the Turn of 4♣ and River of 3♥ to give Kevin Allen victory with just King-high.

The first prize of £158,700 is the biggest of Kevin Allen´s career – surpassing the £120,000 he won with victory in Dusk till Dawn´s Monte Carlo tournament back in April. The other payouts for those who reached Day 3 of the GukPT Grand Final were: