Gambling legislation failed to progress in Illinois and Massachusetts, but things are looking a bit brighter in Louisiana as lawmakers consider online gaming. 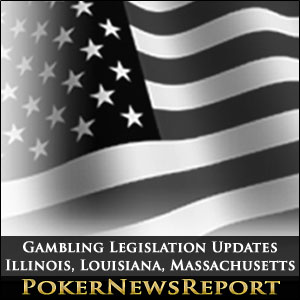 Gambling legislation failed to progress in Illinois and Massachusetts, but things are looking a bit brighter in Louisiana as lawmakers consider online gaming.

Rumors have also circulated that online poker and gambling legislation will be introduced at the federal level by at least two different sponsors this summer. While a federal regime would prove much more beneficial to U.S. players, we have heard those rumors before. So until federal legislators make progress on any such proposals, let’s look at recent events on the state level.

Facing a severe pension crisis said to be in the range of $97 billion, Illinois’ spring legislative session concluded without the approval of a gambling expansion bill. The proposal that would have added five casinos in Illinois and also allow slot machines at racetracks and airports will have to be re-visited at a later date. Lawmakers could not hammer out the details of the bill prior to a summer recess.

With regards to online gambling, the draft of a standalone bill was circulated among legislators after having been removed from the gambling expansion package a few weeks ago. The online gambling bill was never introduced, as legislators were more concerned with proposals to allow gay marriage, carry concealed weapons, and pension reform. Only the firearm legislation gained approval, with some lawmakers up in arms over what many perceive to be a wasted spring session.

A vote of 62-22 by the Louisiana House favors an online gambling feasibility study. The matter now goes before the Senate for approval. The Senate Committee on Judiciary B will reportedly debate the issue before a vote is cast.

Bayou State legislators have been considering a feasibility study since March when Rep. Mike Huval first floated the idea before his colleagues as a way to increase revenue. More than $14 billion has landed in state coffers since 1990 thanks to the state’s brick and mortar casinos and riverboats, which total roughly two dozen combined.

Bay State lawmakers had included online gambling as an amendment to the state’s 2014 Budget Proposal. This followed similar measures failing to gain support this year and the previous two. The latest attempt was ruled unconstitutional and was removed from the proposed budget.

Massachusetts is still scheduled to open three casinos and a slot parlor beginning in 2016. Online poker players had hoped that gambling over the Internet would be legalized before the land-based operations kicked in. Just as Illinois residents, Massachusetts’ natives will have to wait for their legislators to re-visit online poker and gambling legislation at some future date.