Galen Hall just ahead for final table at WPT Championship

That’s it – we’re down to the final six at the World Poker Tour Championship’s $25,000 buy-in event following five days of play at The Bellagio in Las Vegas. 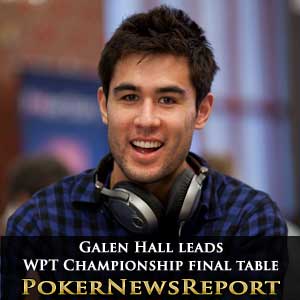 That’s it – we’re down to the final six at the World Poker Tour Championship’s $25,000 buy-in event following five days of play at The Bellagio in Las Vegas.

Having started with 220 competitors, the half-dozen who remain will now battle it our for the $1,618,344 top prize at tomorrow’s televised final table in the Fontana Lounge of the casino.

Hall, who hopes to attend Stanford University next year, was practically an unknown before picking up $2.3 million with his PCA win in the Bahamas back in January.

The 24-year old said that, after making “two final tables in Madrid” recently without being able to stay the course, he believes he has “some wood to knock on for this one”.

Hall has had a great season so far, though, finishing seventh in the €25,000 High Roller event at this month’s European Poker Tour Grand Final in Spain, and also ending as runner-up to Florida’s Jason Mercier in the even more recent EPT Champion of Champions tournament – also in Madrid.

Seiver – who now lives in Vegas – is “extremely excited” to be in such a great position heading into the last day, pointing out that this is his “first WPT final table” and is hopeful of making it memorable with a win.

The 26-year-old cash game specialist, who picked up the 2008 World Series of Poker $5,000 No-Limit Hold’em event bracelet, has earned about $2.3 million over his career – which is amazingly about $100,000 less than leading final table rival Hall.

The original plan was for the poker tournament to take a week, but the field was cut so quickly that the event will now be completed within six days with a break between days five and seven.

While Seiver admits to being “exhausted” and knows the day off “will help me recuperate”, he reckons the other five finalists will also “be tired and exhausted” so would actually prefer to have got the finale underway earlier as he “might be able to do better” than his opponents “on less energy”.

Meanwhile, Andy Frankenberger, from Massachusetts, has been named as the WPT’s Season Nine Player of the Year following the exit of Swiss-based Lebanese star Sam el Sayed.

He won the Legends of Poker event in Los Angeles back in August last year, while also making the Festa al Lago final table and the cash with a 16th place finish in the Doyle Brunson Five Diamond World Poker Classic in December.