Days 2A and 2B were played both together and separately in the WSOP Main Event Tuesday with France’s Gaelle Baumann coming out on top. 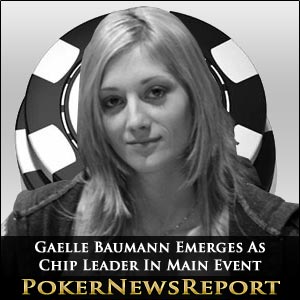 Days 2A and 2B were played both together and separately in the Main Event Tuesday with France’s Gaelle Baumann coming out on top.

The 657 Day 1A survivors played in the Amazon Room on Tuesday while the Pavilion and Brasilia rooms held the 1,387 players from Day 1B. A total of 842 players bagged up chips from the three rooms of the Rio All Suite Hotel & Casino in Las Vegas and will move on to play again Thursday along with survivors of tomorrow’s action that will be comprised of Day 1C entrants.

The fairer sex has landed at the final table only one time in Main Event history when Barbara Enright nailed down fifth place in 1995. Baumann has amassed 505,800 chips and is not the only woman player in good standing. Vanessa Selbst finished the day’s action with 350,400.

Mark Demirdjian (499,990) currently holds down second place. Trailing him is Shaun Deeb, who is fresh off a second place finish in a $25,300 satellite feeding into the BIG ONE For ONE DROP that paid a cool $1 million. Deeb sits in third place with a stack of 460,900. I ended up busting a few 30 to 50k stacks, Deeb said, recounting the day’s successes to Card Player. I accumulated 250,000 chips at a 1k big blind level in like an hour. I won every hand. It was a lot of fun.

John Hoang, who ended Day 1B as chip leader for that day with 180,000, managed to nearly double up in his second day of competition and moves on with 346,000 in chips, good for 12th place at this stage of the competition. Five former WSOP Main Event champions will also be progressing in the tourney and joining Thursday’s action. Dan Harrington, Robert Varkonyi, Jerry Yang, Peter Eastgate and Pius Heinz are all alive in the Main Event and vying for a second Main Event title.

Day 2c will commence Wednesday at noon Vegas time with Day 1C survivors. Those who bag chips will play for the first time with the entire field on Thursday.