Full Tilt Poker’s unique “Rush Poker” innovation, which allows a pool of players to play quickly and to continuously be rushed to a new table upon folding their cards at their previous table, is a concept that is neither exclusive nor patentable, according to Per Hildebrand, chairman and vice president of sales at InstaDeal Poker Network. 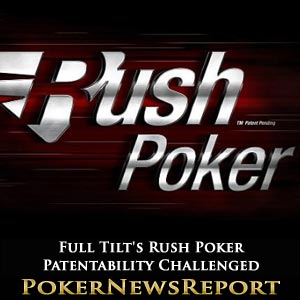 Full Tilt Poker’s unique “Rush Poker” innovation, which allows a pool of players to play quickly and to continuously be rushed to a new table upon folding their cards at their previous table, is a concept that is neither exclusive nor patentable, according to Per Hildebrand, chairman and vice president of sales at InstaDeal Poker Network.

Following several years of product development, InstaDeal has rolled out its own version of Rush Poker that is targeting both [geolink href=”https://www.pokernewsreport.com/mobile-poker-sites”]mobile poker[/geolink] and online poker players after consulting with legal experts and concluding that Rush Poker does not establish the required criteria to be granted a patent.

Full Tilt has applied for patents for the fast-paced poker concept in several global markets, including the United States, Australia, Canada and Europe. The shuttered poker site has vowed to protect its creative software invention, stating, “Full Tilt Poker, its Affiliates and/or its Parent Company will take vigorous legal action against any infringement of their patent rights.”

Hildebrand, the former CEO of the Entraction Network, considers the intellectual property of the pending patents unenforceable and claims that feedback he received from his attorneys regarding Rush Poker’s chances of success in acquiring patent rights was “fairly negative, even from the start, as FTP only met one of the three criteria required to be granted a patent.”

“From that time on we were confident they were never going to get a patent for it and so we felt it was safe to start moving forward with InstaDeal,” Hildebrand added.

Hildebrand readily admitted that the 10-year application process for securing a patent is “ridiculous considering how quickly today’s market is moving,” but was thankful that Full Tilt’s warnings to competitors may have scared off some of his rivals and allowed InstaDeal to get a jump on offering the product to poker players before other operators could do so.

“We are a small company that has developed a great product so we’re happy with others thinking the FTP patent applied for so long,” he said.

Speaking of rivals, the scuttlebutt in the industry is that the world’s largest poker site is currently developing its own Rush Poker concept to offer its loyal players.

“PokerStars has suggested launching something similar and no one really knows what they’re up to but we gather that they’re looking into the legals. In all honesty I’m a little surprised that they haven’t launched anything yet,” Hildebrand said.

In September, a post made on a popular online poker forum from an individual using the name “Pokerstars Stefan”, who claimed to be affiliated with the management team at PokerStars said, “PokerStars is developing a fast moving ring games product. We expect it to be available for public beta testing in a few months.”

Full Tilt introduced Rush Poker in early 2010 and it became quite popular among a certain faction of players from the start. “Online poker on steroids” and “an amazing concept,” were some of the opinions expressed by poker forum regulars. However, some hardcore online pros weren’t as easily impressed. One of the drawbacks mentioned by the more experienced players was that if you spotted a fish or poor player during Rush Poker play, it could be a while before you found yourself seated at the same table with him.

The recent acquisition agreement between Groupe Bernard Tapie (GBT) and the U.S. Department of Justice (DoJ) in which Full Tilt Poker will forfeit its company assets to the DoJ, who, in turn, will sell the assets of Full Tilt to GBT for $80 million, is believed to include the Rush Poker software.

InstaDeal touts its speed-style poker as being geared toward the casual player. The thinking is that the more experienced players will not bust the casual players in the fast-paced game because with quicker action available, the lesser players will not be inclined to play as many weak starting hands. Also, the pros will not be able to track or find the fish or weaker players as easily with the constant table-changing.

Hildebrand believes that playing poker on a mobile phone is well-suited to a fast poker style such as Rush Poker, InstaDeal and other models expected to be launched soon by competitors.

“We started looking at Rush Poker before the smartphone market was so big and at that time we were targeting terminals for after we’d build up liquidity through online operators,” Hildebrand said.

“Now we think mobile suits us well, and we think we have a very good solution there as it works without going through the app store. It might not be operable in more than one table at a time on mobile but for rush players that’s often enough.” Hildebrand added. “The growth of mobile might be what encourages other companies to decide to make their entry quickly.”

The next step for InstaDeal is targeting online dot.com operators and markets that are regulated. “Of course, I am a little concerned about the appeal in regulated markets in terms of liquidity and ring-fenced player bases,” Hildebrand said. “But in the future that shouldn’t be an issue as we can offer the product in terminals.”

An online review of InstaDeal concludes, “The software is pretty fast. A few people seem to not like the bet-slider but if you understand that it was designed for ipads, tablets and pub gaming machines then the design makes sense.” The review also makes note of the fact that the rake may be “a little high at micro-stakes (6% with usual cap) but currently this is more than compensated for by very good bonus/rakeback deals designed to attract regular players to the site.”

A quick glance at the InstaDeal site shows that poker players can log on via Android, iPad or iPhone and can expect to play at a pace “up to 5 times faster than regular poker” and that “this unique Texas Hold’em and Omaha Poker software is available as an online network to be integrated directly into an existing back office to perfectly complement a sports betting, casino or poker offering.”