Former Full Tilt board of director Rafe Furst, whose role in the day-to-day operations of the site was reportedly a minor one, settled the claims against him. 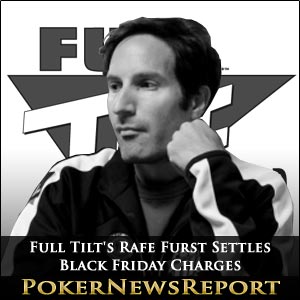 Former Full Tilt board of director Rafe Furst, whose role in the day-to-day operations of the site was reportedly a minor one, settled the claims against him.

Furst and the U.S. Attorneys Office agreed to a Stipulation and Order of Settlement that allows Furst to admit no wrongdoing in the case, but does require the poker pro to forfeit an amount of funds that hasn’t been disclosed. Furst will turn over all monies in the Telamonian Ajax Trust under his name located in a bank in Switzerland. In addition, a civil forfeiture judgment of $150,000 must also be paid by Furst as part of the agreement. All funds will be made available for disposition to U.S. players in the slow-moving remission process.

Furst signed the settlement order that stated he was unaware of any wrongful activity at Full Tilt or that the company had become unable to satisfy its player account liabilities. Along with forfeiting his trust account, Furst agreed to refrain from working in any Internet gambling business in the United States until legalization of such gambling has commenced and his participation is permitted by gaming officials.

Prosecutors had been seeking over $11.7 million from Furst, citing that total as the amount representing the sum of alleged criminal proceeds transferred to Furst from Defendant entity Full Tilt Poker. His fellow board members, Howard Lederer, Chris Ferguson and Ray Bitar, are under the gun for a considerable greater sum being sought by U.S. Attorneys, between $40 and $43 million each.

The Order of Settlement also states that victims of offenses alleged in this action to have been committed by Full Tilt Poker will have the opportunity to file petitions with the U.S. Department of Justice for remission of funds. The fact that U.S. players will eventually be reimbursed clearly played a part in Judge Kimba M. Wood signing the agreement. Whether the other defendants who played a much larger role in the company’s demise will also receive such favorable considerations by the court remains to be seen. Furst had only a 2.6% ownership stake in Tiltware LLC, according to reports.

Furst admits no guilt in the agreement. He was the only one of the four main board members who spoke out last year following the global Ponzi scheme allegations by government attorneys. Furst posted an open letter to the entire poker community over the Internet stating that from a moral, personal, and interpersonal perspective, I feel I’ve got nothing to hide. He also urged those who were spewing hate in his direction to consider that not everything you read is true, and our society is built on a presumption of innocence until proven otherwise.