Pocket Kings, a Full Tilt subsidiary whose assets were forfeited and not part of PokerStars’ purchase of the site last year, was placed into liquidation. 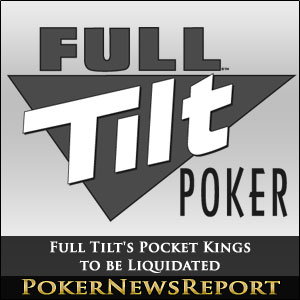 Pocket Kings, a Full Tilt subsidiary whose assets were forfeited and not part of PokerStars’ purchase of the site last year, was placed into liquidation.

The company is based in Dublin, Ireland, and was forced to lay off 180 employees following the suspension of Full Tilt’s license by the Alderney Gambling Control Commission in June of 2011. Last April, when it appeared that Group Bernard Tapie would purchase Full Tilt, Pocket Kings commenced advertising for employees to staff customer service desks in anticipation of Tapie as the new owner.

However, that acquisition fell through when Tapie could not guarantee the full payment of rest-of-world players within 90 days. PokerStars (the Rational Group) was able to meet the demands of the U.S. Department of Justice (DoJ) and did reimburse non-U.S. players immediately upon relaunching Full Tilt on Nov. 6. Ironically enough, the DoJ was so adamant about players being paid quickly, but took the burden of reimbursing U.S. players upon their shoulders and have not yet even begun the remission process.

Pocket Kings is a marketing and technology arm of the former Full Tilt. Due to its liabilities, the company can no longer continue to operate and is forced into liquidation. Declan McDonald from PricewaterhouseCoopers has been appointed liquidator as of Jan. 9. A meeting of creditors was held the next day. Rekop Limited, another Full Tilt company that held an online gambling license in France, also is succumbing to the liquidation process.

The most recent returns available for Pocket Kings dated April of 2010 list Ray Bitar as chief executive and secretary. Bitar, the former Full Tilt CEO, is currently under electronic home-monitoring in California following his surrender to authorities last year. Bitar is facing criminal charges that include wire fraud and money laundering, along with civil allegations. His fellow Full Tilt board members, Rafe Furst, Howard Lederer and Chris Ferguson were all charged with only civil offenses for their roles in the mismanagement of Full Tilt. Lederer and Furst have since settled their cases with U.S. prosecutors and received penalties that many in the poker community view as a slap on the wrist.

Interestingly enough, the Pocket Kings website is still online at www.pocketkings.ie. The company profile states that it was Founded with the goal of creating the best online poker experience anywhere and that it provides services to one of the fastest growing online poker sites, Full Tilt Poker.