Chris Ferguson has filed settlement documents in federal court that if approved by the judge, will conclude the Black Friday allegations against him. 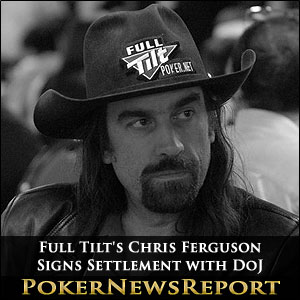 Chris Ferguson has filed settlement documents in federal court that if approved by the judge, will conclude the Black Friday allegations against him.

The former Full Tilt board member has agreed to surrender $2.35 million and an undisclosed amount from a seized bank account. The five-time WSOP champion claims that Full Tilt still owes him $14 million, but he has agreed to forgive the claim for that amount and has stipulated that he will not seek compensation via the upcoming remission process of U.S. players.

In addition, Ferguson has agreed not to be employed by any U.S. online gambling site that is not fully licensed. He claims to be unaware of any wrongful activity at Full Tilt and as such, admits no wrongdoing. Following the anticipated approval of the settlement by Judge Kimba M. Wood, Ferguson has 30 days to pay the agreed upon forfeiture of funds.

Government prosecutors had been seeking $42 million from Ferguson. Similar to settlements made by fellow board members Rafe Furst and Howard Lederer with the DoJ in November and December, respectively, Ferguson also appears to have received a favorable deal. Ray Bitar is the lone former Full Tilt board member who has yet to come to settlement terms with the DoJ. The company’s former CEO, Bitar is also facing criminal charges that include fraud and money laundering that could result in a lengthy prison sentence.

Ferguson has never publicly discussed the allegations against him. Furst sent an open online letter to the poker community shortly after the charges were filed. Lederer waited about 1 and 1/2 years before agreeing to a number of interviews that purportedly told what he knew about the mismanagement of Full Tilt, but his revelations were deemed by many to be less than truthful. Bitar apologized following his surrender to authorities last July.

While the former Full Tilt board members are reaching settlement agreements, former U.S. Full Tilt players are still waiting to be reimbursed. The two-year anniversary of Black Friday is less than two months away. The settlement document mentions that the DOJ is in the process of engaging a claims administrator to facilitate the remission process. Late last year, the DoJ stated that the administrator would be selected and on board in January, but that month has come and gone without the hiring process having been completed.

You can read the stipulation and order of settlement in regard to Christopher Ferguson here.