The second largest online poker provider in the world, Full Tilt, is poised to expand into casino style games. 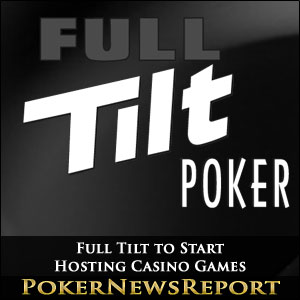 The second largest online poker provider in the world, Full Tilt, is poised to expand into casino style games.

In a shocking announcement, the Parent Rational Groups has confirmed that Full Tilt will start offering casino games. The casino will coincide with the site’s widely popular poker product. And while there is no projected timeline for the casino’s launch, it appears to be happening sooner rather than later.

PokerStars, which is Full Tilt Poker’s biggest rival, has stated that it has no plans to introduce casino games into its repertoire. A spokesman from the Rational Group went on record stating that

While adding new games, we remain committed to building our leadership in poker with PokerStars and Full Tilt Poker and continuing to deliver the highest quality poker experience to players.

Some Full Tilt Poker regulars saw this move coming. For the past several years, the company has been introducing more and more wild variants on its traditional offerings. Home to Rush Poker, 6-card Omaha and other games some players consider to be more about gambling than skill, to them it comes as little surprise that Full Tilt would expand into traditional casino games solely based on luck, such as Blackjack and Roulette.

Representatives from the Rational Group assure players that the casino will provide the same high standards of security, safety and quality that they have come to expect. But given Full Tilt Poker’s shady track record, which included its inability to pay out its customers, it stands to reason that some players will be wary of depositing funds into the online casino.

On Monday, it was announced that Full Tilt Poker would be rebranded as Full Tilt Gaming. This led many to believe that the company was expanding its product offerings into table games. This will be the first time in the Rational Group’s 12 year history that it has delved into any game besides poker.

Currently, the only places in the United States to allow online casino style games are self-regulating markets. These include Nevada, Delaware and New Jersey. Online gambling is still deemed illegal on a Federal level and there is little chance that Congress will vote to overturn that ruling. Poker, on the other hand, has been declared a game of skill, leading many to believe that online poker will one day be regulated by the Federal government.