Full Tilt formally announced its first foray into live tournament sponsorship since its relaunch with the hosting of the inaugural Galway Festival this summer. 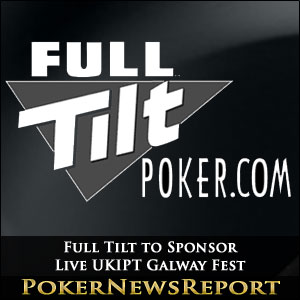 Full Tilt formally announced its first foray into live tournament sponsorship since its relaunch with the hosting of the inaugural Galway Festival this summer.

Scheduled from July 29 – August 12, the UKIPT Galway is set to be Ireland’s largest ever poker event and will take place at a newly-constructed Full Tilt Poker Village located in Galway city proper. A total of 55 tournaments will be played that include the UK vs. Ireland Heads Up, the Irish Poker Championship, a first-time running of the Irish Bridge Masters, and the UKIPT Main Event that will run for five days and guarantee a prize pool of €1,000,000.

The inaugural event will coincide with Galway Raceweek, which is slated for July 29 – August 4 and is one of Ireland’s longest and most beloved horse racing festivals. The combination of live poker and thoroughbred action from the famed Ballybrit Racecourse promises plenty of excitement for those planning to attend.

In a press release issued by Full Tilt’s Head of Marketing Sarne Lightman, it was revealed that Full Tilt will be offering players a bevy of promotions leading up to and including the UKIPT Galway fest. Qualifying satellite tourneys will award winners with packages to the live event and other goodies such as invitations to Full Tilt parties and custom avatars for online use.

During the live event, players can expect consolation prizes for being the first player knocked out or for finishing on the bubble. There are a lot more surprises in store for players, with additional exciting details regarding the Galway Festival to be announced in coming weeks that promises to make the inaugural event one that “players will always remember,” Lightman said.

Full Tilt’s pro stable of “The Professionals” will be represented by Gus Hansen, who has already commited to playing at the UKIPT Galway Main Event that begins on Aug. 8. Although there has been no confirmation from the other two Full Tilt pros, Tom Dwan and Viktor Blom, a number of Full Tilt Poker Ambassadors are expected to be chosen for the tour. In addition to mingling with players both on and off the tables, the ambassadors will have a bounty on their heads for players who knock them out during the tourney while wearing Full Tilt Poker patches.

Prize packages awarding seats to the UKIPT Main Event are already available online at Full Tilt for buy-ins as low as $1.10. Players are encouraged to win their seats as soon as possible to prepare for the 55-event Galway Festival in Ireland in late July.