Finally, Full Tilt will be returning funds to U.S customers. 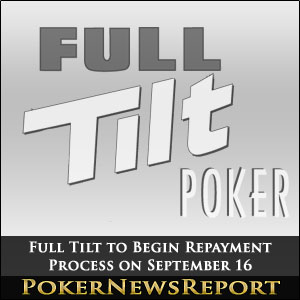 Finally, Full Tilt will be returning funds to U.S customers.

Even the most causal online poker player knows the story of Full Tilt Poker. A once esteemed and highly trafficked site, FTP, along with rival PokerStars, was the site of choice for recognized pros, aspiring amateurs and sick degenerates.

But on April 15, 2011 everything the site stood for came crashing down. Not only was the site seized by the FBI, but its principles were accused of defrauding players out of hundreds of millions of dollars. To date, thousands upon thousands of US players have still not received their funds.

But there is hope. The other day, the Garden City Group (GCG) announced that US players can file a petition for remissions. Claims can be filed as early as September 16 and as late as November 15 of this year – a relatively tight 60-day window. The GCG claims that it will be emailing anyone eligible for recompense instructions on how to file. It also plans to post these instructions on its site.

Despite the good news, there are still several critical questions that remain unanswered. For one, players were informed that they’ll be eligible for an amount up to their final balance on April 15, 2011. However, the time of day was not specified. Thus, a player who went on a heater or cooler that day might be in for an unexpected surprise.

What about non-cash assets? FTP implemented a very lucrative real-money reward system. Points were used to purchase tournament tickets, gifts and entries to satellites. The GCG gave no indication as to if and how non-monetary items would be factored into the remissions process.

And although players know how long they have to file, they were not told how long it would take for their funds to be returned. Considering these players have already waited 28 months, it seems only right the GCG provide this information.

What if a player is entitled to a refund but forgets to file on time? Are these players simply out of luck, or do they have alternative options? Is there an appeals system in place for rejected claims?

Ultimately, while the GCG’s announcement is definitely a step in the right direction, too many unanswered questions remain.

A bit about the Garden City Group: The GCG was appointed by the US Dept. of Justice this past March to supervise the return of US-based deposits. It announced that its review was complete in July, 2013.