With Full Tilt’s relaunching scheduled for one month from now, the site has named Danish pro Gus Hansen as its first ambassador. 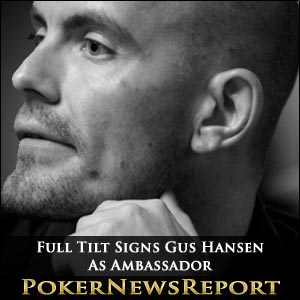 With Full Tilt’s relaunching scheduled for one month from now, the site has named Danish pro Gus Hansen as its first ambassador.

A former Team Full Tilt member during its heyday, Hansen is well-known for his high-stakes action on the site that often resulted in massive bankroll swings in the seven-figure range. In live tournament competition, the 38-year-old has one World Series of Poker bracelet and three World Poker Tour titles, in addition to capturing the 2007 Aussie Millions Main Event–amassing more than $11 million in combined tourney winnings.

Gus is one of the best-known and most respected names in the poker community, said Sarne Lightman, Head of Marketing at the new Full Tilt Poker. Gus has always embodied the best characteristics of the Full Tilt Poker brand and we are thrilled to have him return as an ambassador.

Hansen is expected to represent Full Tilt in live tournaments and online. He had been enjoying a good run at Full Tilt just prior to Black Friday and since the site was shut down, is believed to have been playing under the screen name of “broksi” on PokerStars.

I’m very excited to represent the industry’s most authentic poker brand, Hansen said. Full Tilt Poker has the best games, most innovative software and the strongest poker community. To me this feels like coming home.

Hansen was at one time a Full Tilt shareholder, but apparently never had any managerial responsibilities or was in any way connected with the company’s mismanagement and demise. The U.S. Department of Justice (DoJ) has not named the former world class backgammon player in any criminal or civil allegations.

Full Tilt’s marketing strategy is set to include other as yet unnamed poker stars, according to Lightman, who accepted the marketing position in August after the deal that allowed PokerStars to acquire Full Tilt’s assets via the DoJ. Expect plenty more news in the coming weeks, Lightman said. More international pros, exciting launch promotions, and the return of Full Tilt Poker as the world’s most innovative poker site.

The relaunch is planned to commence no later than Nov. 6 and will immediately reimburse rest-of-world players who have been unable to touch their funds on the site since June of last year. Players in the U.S. are still in limbo, waiting for an announcement from the DoJ as to when and how to submit a claim for their Full Tilt account balances.