While Full Tilt nears its Nov. 6 relaunch date, the site sent emails to U.S. players letting them know that the DoJ will handle the remission process. 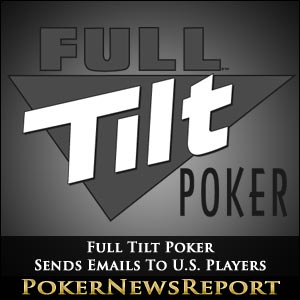 While Full Tilt nears its Nov. 6 relaunch date, the site sent emails to U.S. players letting them know that the DoJ will handle the remission process.

Many Full Tilt players from the U.S. are anxiously waiting for any information on how to go about submitting claims for their account balances frozen in cyberspace since Full Tilt’s shutdown last year. Unfortunately, the email received by U.S. players did not add any new information that players who have been keeping abreast of the Full Tilt saga did not already know.

The email informs those U.S. players who are owed money that they will have the opportunity to file petition with the DoJ through a remission process which will be administrated by the DoJ. Players from the U.S. will be forbidden from playing for real money on the relaunched site, but that play chip games will be available to Full Tilt Poker players in the U.S. following re-launch. The missive did have a seemingly positive spin on the possibility of U.S. players eventually being allowed to play for real money at Full Tilt in the future following online poker legislation in the U.S. by stating that your Full Tilt Points balance will remain intact in your account.

The email concluded by saying that any questions related to the remission process should be directed to the DoJ in accordance with the procedure to be defined by them, as Full Tilt will not be involved in that process. Players throughout the world except for the U.S. and a handful of other countries that Full Tilt will not be operating in have been promised full access to their account balances–$184 million–upon the relaunch date. The remission process for U.S. players is under the control of the asset and forfeiture division of the DoJ, but that government office has provided no further details as to when and how player claims shall be submitted.