The relaunch of Full Tilt Poker is less than one month away and all systems are go as Isle of Man gaming officials granted the site an online gaming license. 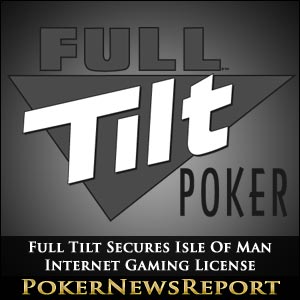 The relaunch of Full Tilt Poker is less than one month away and all systems are go as Isle of Man gaming officials granted the site an online gaming license.

Full Tilt had its operating license revoked by its previous licensing body–the Alderney Gambling Control Commission–last year following the discovery of the mismanagement of company funds after the Black Friday debacle. But since PokerStars acquired the Full Tilt assets in August from the U.S. Department of Justice (DoJ), the company has moved its servers and computer equipment and will now be regulated under Isle of Man online gaming standards.

The [Isle of Man] Gambling Supervision Commission is confident that Full Tilt Poker will safeguard the interests of its players and adhere to the strict policies and procedures governing Isle of Man licensed gaming companies, said Steve Brennan, CEO of the commission. Full Tilt Poker’s application was strengthened by the fact that their new owners and management team are known to us and have an impeccable record of compliance with the Isle of Man’s regulatory requirements.

PokerStars has been licensed in the Isle of Man–a rather tiny island situated between Ireland and Great Britain–since 2005 and although it now controls Full Tilt, the site will be run as a separate entity from PokerStars. Players who have had their funds tied up on the shuttered site since the summer of 2011 may be somewhat leery of trusting the Full Tilt brand again, but PokerStars has assured players that their money will be safe on the relaunched site.

In our view, the Isle of Man’s e-gaming regulations set the gold standard for the online gaming industry, said PokerStars General Counsel Paul Telford. Their attitude toward ensuring that operators provide a service that is safe, fair, and socially responsible is second to none. In particular, the Isle of Man leads the way in ensuring that player funds are protected under mandatory trust arrangements that are built into their regulations.

The relaunch of Full Tilt is set for Nov. 6, at which time non-U.S. players will have access to their accounts in the aggregate sum of $184 million. A timetable for U.S. players to receive their frozen funds has not yet been announced by the DoJ.