The claims administrator for the Full Tilt remission process has updated the website and reports that all players on record have been notified via email. 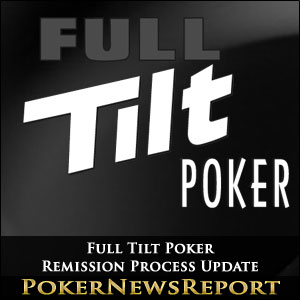 The claims administrator for the Full Tilt remission process has updated the website and reports that all players on record have been notified via email.

The Garden City Group (GCG) sent more than 1.4 million emails to former U.S. Full Tilt players. The latest count indicates that over 23,500 Petitions for Remission have been received by GCG and put on file.

While this number may seem small in comparison to the number of players believed to have active account balances at FTP, keep in mind that the entire claim submission process is only about 1/4 complete with another six weeks to go. The deadline for filing claims is November 16, 2013.

The GCG is now in the process of sending postcards to the physical mailing addresses of players whose email notifications bounced back as undeliverable. The claims administrator also requests that players who may be eligible for reimbursement and have yet to receive an email that contains the required petition and control numbers contact GCG via the fulltiltpokerclaims.com website.

A scan of the thread dedicated to FTP remission issues at online poker forum 2 + 2 indicates that players are getting more answers to their questions and that some troubling issues that cropped up upon the opening of the remission process on September 18 have now been rectified. It is likely that GCG was inundated with player questions just two weeks ago and has finally had a chance to respond and comply with many requests from the players who had been anxious to file early.

One problem that seemingly remains is that some players who claim to have no ties to Full Tilt other than playing there are being tagged as affiliates and therefore ineligible to participate in the remission process. Players who simply referred a friend or received rakeback are apparently receiving notices of ineligibility.

This issue will likely be rectified in due course. Remember that the GCG is merely collecting petitions, compiling information, and notifying the DoJ’s Asset Forfeiture and Money Laundering Section (AFMLS) with the gathered data. The ultimate decision on the affiliate issue lies with the AFMLS.

Players will have the right to contest or appeal any determination that finds them to be ineligible under the affiliate provision. The AFMLS is aware that some players are being labeled as affiliates who do not fall under the exclusion parameters. Expect more information on this issue to be forthcoming and we at PokerNewsReport will keep you updated accordingly.