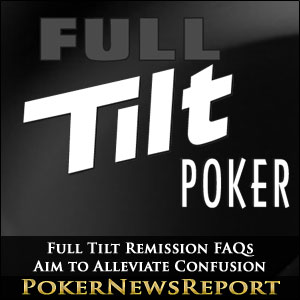 More emails will reportedly be sent today and players with account balances at FTP on April 15, 2011, can begin submitting claims entitled Petition for Remission on Wednesday, September 18. Keep in mind that there is only a two-month window until November 16 for submitting claims and none will be accepted following the cut-off date.

A scan of popular online poker forums has found that many players are still experiencing confusion over the details surrounding the remission process and a number of questions have cropped up. These questions run the gamut of what should be done if an email from GCG never makes it to a player’s in-box all the way to how to pursue claims if the claimant passed away during the nearly 2 and 1/2 years that player account balances have been untouchable.

For this reason, the official website created by the Garden City Group at www.fulltiltpokerclaims.com has posted a frequently asked questions (FAQ) section under a separate tab in hopes of alleviating some concerns of players. Those who are still bewildered about the remission process are advised to take a look at the answers provided before inundating the GCG with questions that have already been answered on the site.

Perhaps the most important issue rattling some players pertains to the actions needed to be taken if the balance that GCG has for your account does not match up with what you believe you are owed. Those players do have the option of disputing the balance. However, additional documentation supporting your claim will be required and it is likely that those who do express such a grievance can expect an even lengthier time to wait for reimbursement than those players who file claims with no extenuating circumstances.

Also worth mentioning is the rumor that surfaced last week regarding an exclusion list of former players whose claims will not be entertained by GCG. That is no longer a rumor and has indeed been confirmed as fact. Vendors, affiliates, employees, owners, officers, sponsored pros both past and present, and those charged either criminally or in a civil action pertaining to Black Friday will not be receiving any funds.

Players who never actually made a deposit are also out of luck. Falling under this category would be those who received a bankroll via an affiliate or were staked.

While the Full Tilt remission process is certain to leave some former U.S. players unsatisfied, the vast majority should be grateful that it is finally here and reimbursement shall commence as soon as no more claims are accepted and all have been reviewed. Players again are advised to take a look at the FAQs at www.fulltiltpokerclaims.com to understand the entire process a bit better.