At 7:00 a.m. ET on Nov. 6, Full Tilt opened its real-money poker tables for the first time since being shutdown since late June of 2011. 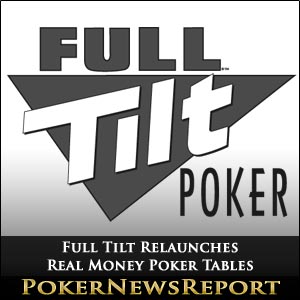 At 7:00 a.m. ET on Nov. 6, Full Tilt opened its real-money poker tables for the first time since being shutdown since late June of 2011.

The relaunch began one-hour prior to the previously scheduled time of 8:00 a.m. ET. Those who were logged in to the site early received a pop-up notice at 6:00 a.m. ET informing that real-money play would commence in one hour. Upon the clock striking 7:00 a.m., another pop-up window appeared, exclaiming, Real money has launched. Gogogo!

The relaunch follows a tumultuous 1 and 1/2 years that saw the Black Friday indictments that prevented U.S. players from playing, the site being shutdown completely two months later, allegations from government lawyers that Full Tilt operated a global Ponzi scheme, the apparent done deal of Group Bernard Tapie (GBT) to purchase the site, failure of the GBT deal to be finalized over the length of time in which players were to be fully repaid, and PokerStars acquiring the assets of Full Tilt through negotiations with the DoJ.

There were slightly less than 3,000 players logged on at Full Tilt prior to the 7:00 a.m. relaunch. Those numbers steadily climbed as word spread that the site was up and running. By five minutes past the hour, 5,738 players had logged on. At 7:10, that number had risen to 8,690. Ten minutes later, 12,457 were either hitting the tables or attempting to withdraw their funds that had been dormant for over a year. At 7:30, player traffic had increased to 14,382. There were 16,036 online at Full Tilt 15 minutes later, and one hour following the real-money relaunch, 17,400 players had logged in. By 8:30 a.m. ET, more than 22,200 players had accessed the relaunched Full Tilt Poker.

Unfortunately, those players attempting to transfer funds to another Full Tilt player within the first hour, as well as those attempting to deposit, received a notice stating that, We can’t process your request right now, please try again soon.

Prior to last year’s shutdown, Full Tilt was the second-ranked online poker site in terms of player traffic. The prediction is that Full Tilt will regain its number two ranking behind PokerStars in three months time. That may be an accurate prediction based on a recent unofficial poll taken on TwoPlusTwo. More than two-thirds of respondents said that they will keep playing on Full Tilt with their repaid funds. Eight percent insisted that they were prepared to be new depositors on the site and 16% said they would take advantage of the Deal Me In Bonus before cashing out. Only slightly more than 10% reported a plan of withdrawing their funds immediately upon relaunch.

Though Full Tilt has experienced a tremendous amount of bad publicity since Black Friday, it seems that the company’s marketing efforts may not be as difficult as many would have thought just a few months ago. Thanks to the bailout by PokerStars, the Full Tilt name may come to be respected once again.