Players anxiously awaiting the relaunch of Full Tilt Poker on Nov. 6 will be able to log on and play at play-money tables sometime during the week of Oct. 29. 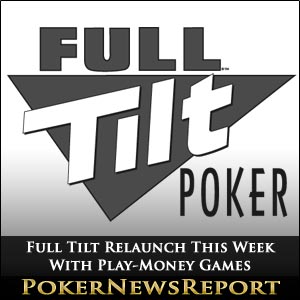 Players anxiously awaiting the relaunch of Full Tilt Poker on Nov. 6 will be able to log on and play at play-money tables sometime during the week of Oct. 29.

The exact date is uncertain, but Full Tilt Poker Room Manager Shyam Markus posted on a 2+2 thread that players will have an actual game to log into and play (play money) with this week. While it may be exciting for some to be playing any kind of games on Full Tilt, most players are more concerned about the $184 million set to be repaid to rest-of-world players by Nov. 6.

Apparently, players in France will get a jump on players in other countries, according to a press release issued by French regulating body ARJEL and reported by Casino Choice that said, the date of effective implementation of the reimbursement process of [French] players is Nov. 2, 2012. France is one of the countries, in addition to Spain, Belgium, Italy, Estonia and Denmark, in which Full Tilt will not be operating. Players in all of those countries, except for Italy, will obtain reimbursement of funds via the PokerStars platform that services those regions. Players will be required to open a PokerStars account and pair it with their Full Tilt account. Italian gaming regulators and PokerStars officials continue discussions in hopes of agreeing on an acceptable plan of repayment.

Of course, Full Tilt will also not be operating real-money games in the U.S., but play-money tables will be available to Americans this week. There is still no announcement from the U.S. Department of Justice on when U.S. players can begin submitting claims for their Full Tilt funds that have been languishing in cyberspace for more than 1 and 1/2 years.

Markus also posted updated information regarding the conversion policy for Iron Man mid-year bonuses. In those markets mentioned above where Full Tilt will not be operating, the bonuses will be transferred, along with reward points and the real-money account balances, to players’ PokerStars accounts. Players with a history of significant playing time at Full Tilt may receive a corresponding boost in their VIP status at PokerStars. An email explaining the conversion policy details should be arriving in players’ in-boxes in coming days.

Rest-of-world players will be permitted to withdraw any or all of their account balances upon the Nov. 6 relaunch. However, Full Tilt is hoping that players will once again become loyal customers by offering various promotions that include freerolls, cash bonuses, Happy Hours, and the upcoming FTOPS tournament.