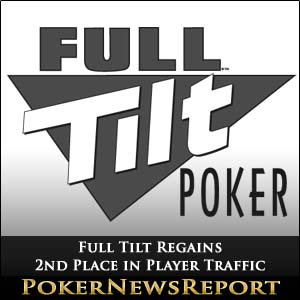 Rest-of-world players flocked to Full Tilt on the opening day of the site’s much-heralded relaunch, laying claim to $184 million in account balances that had been idle since June of last year. At one point, Full Tilt’s running total of those logged on to the site eclipsed 45,000. However, this presumably included play-money tables and those who were connected to the Full Tilt client and not necessarily playing.

The return of Full Tilt Poker fills a hole in the community that’s been felt by millions of players, Full Tilt pro Gus Hansen said in a press release. A lot of people have been waiting for this day to come and now that it’s here, we can all look towards a brighter future.

The number of cash players at the tables peaked at 14,773 on Full Tilt’s first day online, trailing only 31,895 players at PokerStars. The relaunch knocked iPoker into third place with 5,055 players at the two-tier network’s 24-hour peak.

Some players reported instances of deposits taking a long time to be credited to their accounts and others received notices that delays could be anticipated due to the high volume of players using cashier functions. PokerStars posted the following on TwoPlusTwo in regard to cashier usage: Please note that we are experiencing some technical difficulties with the transfer function between Full Tilt and PokerStars. There are also other issues that have been reported, which we are looking into. However, the actual play at the tables appeared to be running smoothly.

Full Tilt held the second spot in player traffic prior to the site’s shutdown. Industry observers anticipated that the first day back online would be a busy one. Whether Full Tilt can retain its position behind sister site PokerStars in coming months remains to be seen. The Deal Me In Bonus will likely keep a number of grinders at Full Tilt for awhile. But with a lower rakeback percentage than many other Internet poker sites are currently offering, the traffic numbers may change over time. But as many players have repeatedly opined, the software at Full Tilt is second to none.

Full Tilt Poker is back and better than ever, said Sarne Lightman, Head of Marketing for Full Tilt Poker . We are bringing back to the players everything they loved about the site and we invite them to help us celebrate by joining our Deal Me In launch promotions.