PokerStars and the Tapie group were not the only entities who considered purchasing Full Tilt, as Bwin.party has revealed that they passed on the deal. 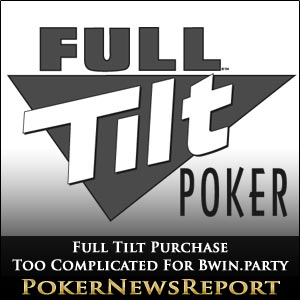 PokerStars and the Tapie group were not the only entities who considered purchasing Full Tilt Poker, as Bwin.party has revealed that they passed on the deal.

After announcing a strategy to improve its share of the online poker market that includes the long-planned merger of poker rooms Bwin and [geolink href=”https://www.pokernewsreport.com/partypoker”]PartyPoker[/geolink], Bwin.party executives have revealed that the company analyzed the pros and cons of acquiring the assets of Full Tilt Poker while the site was still available and decided to decline purchasing the site.

We did in fact take a look at it, said co-CEO Jim Ryan. We looked at it in the early phases of the asset becoming available, and not that long ago we were re-invited to come back and take a look at the asset. Our assessment was it was too complicated to execute.

PokerStars, of course, did manage to acquire Full Tilt and has already made the first of four scheduled payments to the U.S. Department of Justice (DoJ) and is planning to re-launch the site no later than Nov. 6. Rest-of-world players will be reunited with their frozen account balances at that time, while U.S. players will have to file claims with the asset and forfeiture division of the DoJ once those details are announced.

“We congratulate PokerStars for completing this,Ryan graciously said. We think that transaction is nothing but fantastic, for the poker community, the poker consumers, and we think it will be very good news for the European poker market, as some of those missing dollars come back into the system.

Bwin.party saw the negatives in dealing with the DoJ and the soured reputation of the Full Tilt brand and made the decision instead to focus their energies on the integration of PartyPoker and the Bwin poker room currently on the Ongame network and restructuring the poker room ecology to seek a balance so that the more experienced players don’t annihilate the recreational players. That plan includes removing some high-stakes tables from the lobby as well as amending the bonus structure so that grinders who play for a living are enticed to play at the site due to the player “liquidity as opposed to a return of revenue to them” in available bonuses.