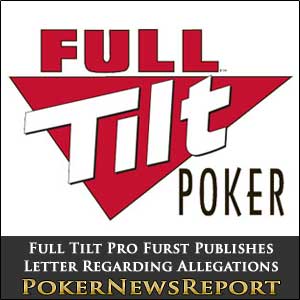 Rafael Furst, the Full Tilt board of director and poker pro who was named as a defendant in Tuesday’s Amended Civil Complaint along with fellow Full Tilt board members Howard Lederer and Chris Ferguson, has published an open letter to the public about the allegations levied against him and Full Tilt.

Furst said that he cannot comment on the pending litigation due to the seriousness of the charges against him, although he would like to. He further states that people should not believe everything they read and that he is going through a difficult time having to endure the potshots being taken at me in the media and social networks without being able to defend myself.

Here, in its entirety, is the complete open letter:

By now you’ve no doubt heard about the allegations against me in a Federal civil suit regarding Full Tilt Poker.  Because of the seriousness of the allegations I’m not able to comment at all about the pending case, much as I would like to.  From a moral, personal and interpersonal perspective I feel I’ve got nothing to hide.  And since I trust in our system of justice and have the utmost respect for my legal counsel, I will refrain from talking about the case until it’s resolved.

What I would like to express here is concern for my family, friends, colleagues and supporters who believe in me and who feel my pain as if it were their own.  It sucks to have to endure the character assassination and potshots being taken at me in the media and social networks without being able to defend myself.  Privately though I have received incredible support from many of you, and I can’t tell you how much it means to me.  May you never have to endure something like this, but if you do, I hope you have friends as good as mine.

To the skeptics, please consider that not everything you read is true, and our society is built on a presumption of innocence until proven otherwise.  It’s difficult to take back hurtful things that you might later regret, when the damage has already been done.

To those of you who have asked what you can do to show your support, I am grateful for the offer.  My only request at this time would be to not let the naysayers and haters be the only voices out there expressing their opinion of me. My twitter is @rafefurst, and I’d love to hear from you publicly.

With Respect and Love,

Reading some of the comments posted at Emergent Fool in reply to Furst’s letter, it is plain to see, and understandably so, that many Full Tilt Poker players are incredibly angry. Many comments label Furst and his Full Tilt cohorts as greedy thieves who should find a way to make things right by paying back all the players who have unpaid account balances at Full Tilt.

I agree that people have a right to be angry, but its also important to keep in mind that allegations need to be proven in a court of law and that Furst, Ferguson and Lederer do have a right to their day in court as provided by the Constitution of the United States.