With Full Tilt scheduled to be up and running in 90 days, PokerStars has released some information regarding the re-launch, transferring funds, and cashing out. 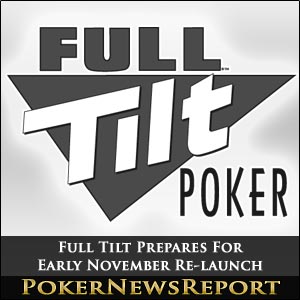 With Full Tilt scheduled to be up and running in 90 days, PokerStars has released some information regarding the re-launch, transferring funds, and cashing out.

All players outside of the U.S. and a handful of European countries with account balances on Full Tilt will have their full balances reinstated upon re-launching right around November 4. This means that more than $100 million will instantaneously be back in circulation into the online poker community once the virtual doors are re-opened. Players can cashout immediately without having to meet play-through requirements or jump through any other hoops. Although specific options for cashing out have not been completely worked out, Full Tilt (PokerStars) will strive to ensure our complete payment offering, according to a statement on the PokerStars website.

The same Full Tilt software that players are accustomed to will be in use once again. The re-launched Full Tilt site will bring back the innovative features, the authentic poker and the cutting-edge software that made it so popular with millions of players worldwide, said Eric Hollreiser, Head of Corporate Communications at PokerStars.

Although Full Tilt will be owned by PokerStars, it will be operated as a separate poker site with separate player pools. However, player accounts between the two sites will be connected, allowing for the transfer of funds between both sites. So if you’re uncomfortable playing at Full Tilt after 15 months of worrying and wondering if you’d ever see your money again, simply transfer your funds to PokerStars and play there–or cashout. But you can move funds at will and play at both sites simultaneously if you so desire. If your account happens to be blocked on one site–by request or for cheating or whatever–then your account will be blocked on the other site as well.

PokerStars is seeking operating licenses for Full Tilt in both Malta and the Isle of Man to be operated with the same pool of players. This is already done with PokerStars.eu that was launched in January. Although the pool of players in Europe is the same as the PokerStars.com site, separate domains are needed for income tax reasons in certain countries. Full Tilt is expected to follow this model. Also, Full Tilt will not be operating in France, Italy, Estonia, Belgium, Spain or Denmark.

For players in the above mentioned countries that can no longer log on and play at the re-launched Full Tilt, the process for cashing out is still being solidified. PokerStars is busily working with the relevant authorities in these regions and hopes to make funds available to those players by the November re-launch. As for players in the U.S., details on the cashout process will be handled through an asset and forfeiture division of the U.S.Department of Justice. Those procedures have yet to be fully determined.

Full Tilt will operate from Dublin, Ireland, as it had prior to Black Friday. The roughly 200 employees still working there is a far cry from the 700 who had been employed there in Full Tilt’s heyday. However, Hollreiser told the Irish Examiner that he expects future “growth in the Dublin office.” A new management team is being assembled to allow for flexibility in differentiating from PokerStars in regards to marketing, promotions, tournament schedules and rake structures.

It’s too early to begin disclosing many details about our strategic plans for Full Tilt, but our first order of business is to re-open the site, pay back all of the players and begin rebuilding Full Tilt’s reputation, Hollreiser said. That reputation has been severely damaged in 15 months time, but PokerStars is committed to regaining the trust of players.

It’s highly likely that a certain segment of players have sworn off ever playing at Full Tilt again no matter who is running the show simply due to the bad experience involved. However, PokerStars is banking on the fact that they can eventually win the hearts of those players in due course and have them return to Full Tilt under the new regime.