A Group Bernard Tapie lawyer has stated that Full Tilt Poker is in worse shape financially than was originally believed, which has put a crimp in the acquisition process. 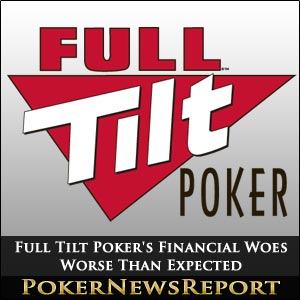 The lawyer representing Group Bernard Tapie (GBT) in negotiations to purchase Full Tilt Poker has stated that the shuttered poker room is in worse shape financially than was originally believed, which has put a crimp in the acquisition process.

The poker industry is abuzz with recent allegations that a handful of well-known poker pros, including Barry Greenstein, Phil Ivey, Erick Lindgren, and Mike Matusow, owe almost $17 million to Full Tilt, which is causing delays in GBT acquiring the assets of the company and moving forward with reimbursing players with money frozen on the site.

“If the money doesn’t come in, it creates a serious obstacle to completion of the deal. This isn’t the only issue with the takeover, and the deal won’t end on any one issue, but this is a substantial item,” Behn Dayanim, the attorney trying to facilitate the deal on behalf of GBT, recently told PokerStrategy,

Some of the pros who are believed to owe money to the beleaguered poker room have spoken out about the allegations that their debts are causing the deal to be held up, including Greenstein, who was recently elected to the Poker Hall of Fame and is widely known for his substantial donations to charitable causes.

Matusow, whose debt was said to be in the neighborhood of $700,000, denied that he was in arrears to Full Tilt, and tweeted to his Twitter following of 52,000, “For all my fans out there, just to let you all know, I don’t owe Full Tilt anything. Why my name is mentioned, I don’t know.”

A March 1 date for the restarting of Full Tilt was previously anticipated by Dayanim, but due to the money said to be owed to the site by the pro players, that date is now uncertain.

“It’s very difficult to predict with any certainty when the start date will be,” Dayanim told PocketFives. “There are a few issues that are substantial and material. The debt owed to Full Tilt Poker by players is a significant issue. We are hoping we’ll be able to work through it. This is a significant issue that we’re trying to address and we’ve had limited success so far.”

The saga of Full Tilt continues. Players with frozen bankrolls on the site have experienced the upswings and downswings well known to poker players. The bad news of the poker room shutting down, followed by the good news of its sale and eventual planned reimbursement of players, followed again by bad news regarding problems with the acquisition going through. One can only hope that someday the purchase and payback of players will commence. Dayanim assured players that he will strive to make the asset acquisition become a reality.

When a lawyer says things like that, it gives you hope and makes you want to believe him. But when Dayanim also says, ““The company is in worse financial condition than we anticipated,” it feels like another downswing.