In a scenario which could never have been forecast two years ago, Full Tilt Poker is to host satellites to the PokerStars sponsored EPT Main Event in London. 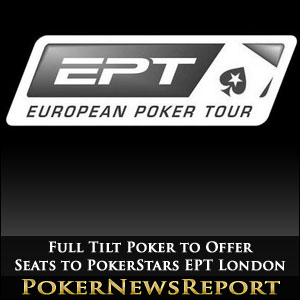 In a scenario which could never have been forecast two years ago, Full Tilt Poker is to host satellites to the PokerStars sponsored EPT Main Event in London.

Full Tilt Poker has announced that it will be hosting online satellites to the EPT London Main Event from this weekend (January 27th), with winners of the $640.00 buy-in tournaments receiving a prize package worth approximately $12,000.

The package includes a buy-in to the EPT London Main Event (£5,250 – sterling) which starts on Sunday March 10th at the Victoria Grosvenor Casino and a further $3,500 to account for accommodation and spending money.

Players without substantial bankrolls will be pleased to learn that there are also a series of lower buy-in qualifiers with guaranteed seats to the Sunday satellites, including 36-player shootout Sit n Go tournaments (with a buy-in of $22.00) and a $22.00 buy-in Turbo Re-buy on Saturday lunchtime (12.20pm GMT).

EPT London to be Massive

In addition to the EPT Main Event, the visit of the European Poker Tour to London coincides with the Grand Final of the PokerStars-sponsored UKIPT (how long until Full Tilt Poker start offering seats to that series?), the London Poker Festival and Grosvenor Casino´s European Poker Championships.

The last time that an EPT series was hosted in London, more than £5 million ($7.9 million) was paid out in prize money, with EPT London Main Event champion Benny Spindler collecting £750,000 ($1.19 million) for defeating Steve O´Dwyer in the climax of the tournament.

The full schedule for the London leg of the European Poker Tour is yet to be announced, but likely to include at least twenty additional side events plus live satellites into the EPT London Main Event. Because of the volume of events, some of the tournaments will be played at the Landmark Hotel in Marylebone Road – a new venue for the EPT London.

The online satellites to the EPT London Main Event are scheduled to run every Sunday on Full Tilt Poker at 15.30pm ET (8.30pm GMT) until February 24th.