Representatives of Full Tilt Poker are set to meet with the Alderney Gaming Control Commission (AGCC) in a closed session at the Riverbank Park Plaza Hotel in London on Monday. 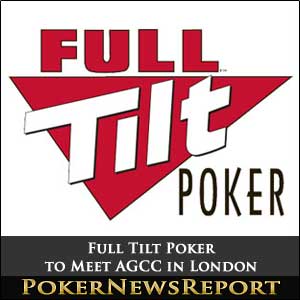 Full Tilt Poker representatives are set to meet with the Alderney Gaming Control Commission (AGCC) in a closed session at the Riverbank Park Plaza Hotel in London on Monday.

This meeting, which was originally adjourned from July 26th in order to give Full Tilt Poker time to pursue “commercial negotiations” with an unknown investor, was originally called following a special investigation into Full Tilt Poker´s operating activities following the indictments issued against the company in the United States.

Immediately after the events of Black Friday, the AGCC issued a statement that they would review the documentation affecting its licensee and undertake its own investigations. Although the indictments were issued by the FBI and US Department of Justice (DoJ), the AGCC revealed that Full Tilt Poker had denied the allegations made in the indictments and, until their investigations had concluded, the AGCC was not prepared to comment any further.

Three weeks into the investigation, the AGCC released a further statement addressing concerns that Full Tilt Poker were making no effort to repay their clients in the USA despite PokerStars – who had been served with the same indictments as Full Tilt Poker – already having refunded most of their American poker players. Their statement said that the AGCC had “no reason to believe that player fund transactions are fundamentally threatened” and they anticipated a separate statement from Full Tilt Poker in due course.

Full Tilt Poker – who had loved promoting itself with news releases every few days – failed to issue any statements for months, and only recently have broken their silence. In the meantime, the AGCC continued their special investigation and, on June 29th, broke the news that they were withdrawing Full Tilt Poker´s operating worldwide operating license as ”grounds were found to indicate that these licensees and their business associates were operating contrary to Alderney legislation. The nature of the findings necessitated the taking of immediate action in the public interest.”

As speculation grew about the misappropriation of player´s funds and allegations were made about loans to players, lawsuits started to be issued in the States against the company under RICO legislation (Racketeer Influenced and Corrupt Organizations). It became clear that Full Tilt Poker had mismanaged the collection of player´s deposits and had been themselves the victim of a payment processing fraud. The AGCC issued a statement again on the 3rd of July, advising interested parties that they were in three-way talks with Full Tilt Poker and “a third party” concerning the re-financing of the company.

The AGCC then announced that a public meeting was to be called with the purpose of hearing evidence from Full Tilt Poker and the AGCC to explain the suspension of Full Tilt Poker´s operating license. In the announcement of the meeting, the AGCC did not hide the fact that the company had failed to satisfy the AGCC that its activities – both inside and outside the US – were in order. Sadly, that meeting (July 26th) deteriorated into a shambles, as the legal representatives of Full Tilt Poker first asked for an adjournment and then for a private hearing.

The AGCC agreed to a postponement of the initial hearing in the interests of the company and of the players who were owed money. Sadly, the “commercial negotiations” came to nothing and Full Tilt Poker still have the US Department of Justice indictments hanging over them and three different class-action lawsuits from ex-players. It is understood that with a significant amount of capital frozen by the DoJ, Full Tilt Poker´s cash flow is extremely limited and it is unlikely that any players will be seeing any of their Full Tilt Poker money for a very long time.

The Likely Conclusion from Monday´s Meeting

The likely conclusion from Monday´s meeting between Full Tilt Poker and the AGCC is that Full Tilt Poker´s operating license will remain indefinitely suspended. Enabling Full Tilt poker to open and receive deposits from players, without being able to repay existing creditors, would be against the AGCC´s insistence that their primary concern is the protection of the player. Should the company be allowed to operate again, it could lead to a mass attempted withdrawal by players gaining access to the Full Tilt Poker Cashier page – which would ultimately bankrupt the company.