Full Tilt Poker (FTP) has released a statement on the deal signed between Group Bernard Tapie (GBT) and the U.S. Department of Justice (DoJ) calling for FTP to forfeit its assets directly to the DoJ and the DoJ, in turn, selling those assets to GBT for $80 million. 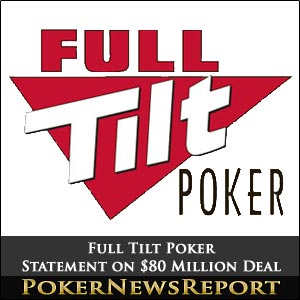 Full Tilt Poker (FTP) has released a statement on the deal signed between Group Bernard Tapie (GBT) and the U.S. Department of Justice (DoJ) calling for FTP to forfeit its assets directly to the DoJ and the DoJ, in turn, selling those assets to GBT for $80 million.

The agreement was labeled as “historic” by FTP attorney Jeff Ifrah due to the uncommonality of the U.S. government obtaining the assets of an offshore poker site that has been indicted on fraud, money laundering and illegal gambling charges and then turning around and selling those assets to a French investment company that has a reputation for bailing out floundering companies. Also, the DoJ will reportedly be directly involved in reimbursing U.S. players with unpaid account balances at FTP.

Here is the full text of the statement provided by FTP:

[geolink href=”https://www.pokernewsreport.com/full-tilt-poker”]Full Tilt Poker[/geolink] is pleased that the terms of the agreement between Groupe Bernard Tapie (GBT) and the Department of Justice have been finalized, and that the agreement provides for GBT to repay or make whole players outside of the United States and for the Department of Justice to permit United States players to request compensation out of the forfeited funds. Since Black Friday, repaying customers has been FTP’s number one priority.

Ray Bitar, co-Founder of Full Tilt Poker stated: “I am extremely pleased with the efforts of the Department of Justice, and the Groupe Bernard Tapie corporation, and appreciate their continued dedication in working towards a mutually beneficial agreement that will facilitate repayment of the players .”

Now that the agreement with DoJ has been reached, GBT and Full Tilt Poker will now turn to memorializing the final terms of their agreement, to bring this matter to a complete resolution as soon as possible.

Full Tilt Poker would like to thank all its customers for their continued patience since Black Friday and during this negotiation process.

It is important to note that FTP shareholders must still approve the agreement by a two-thirds majority. Following the statement released by FTP, attorneys for FTP and GBT commented on the acquisition agreement between the parties involved.

A letter of agreement with the DOJ has been executed, said GBT attorney Benham Dayanim. It states that in the event that the Full Tilt companies consent to a forfeiture of their assets, GBT will purchase those assets. This is the first major step in the process of a sale; the next steps include Full Tilt consenting to the forfeiture and a definitive final agreement with the DoJ.

Ifrah, FTP’s lawyer, said, The deal is clearly historic. It’s an incredible achievement. A lot of thanks and gratitude are owed to both GBT and the DoJ. Clearly there remain a lot of questions on the logistics of a sale, including when players will get paid, how they’ll file claims, and when Full Tilt will become operational. I hope I can help obtain answers to those questions quickly, and make information available to players as soon as possible.

The issue of FTP players receiving reimbursements directly from the DoJ is indeed, historic. But, as stated by many players on various online poker forums and threads, it doesn’t matter so much who will reimburse the FTP players’ unpaid account balances. What’s important is that FTP poker players are now a step closer to getting their money.