Full Tilt Poker has released the schedule for its twenty-fourth Full Tilt Online Poker Series, which will take place between November 24th and December 8th. 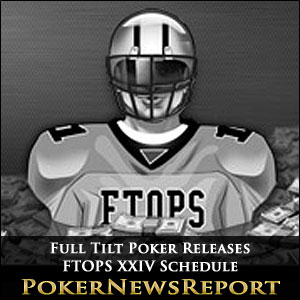 Full Tilt Poker has released the schedule for its twenty-fourth Full Tilt Online Poker Series, which will take place between November 24th and December 8th.

FTOPS XXIV will get underway on Sunday November 24th with a $500,000 guaranteed NL Hold´em Re-Entry Event and, for the next fifteen nights, a further 38 events will complete the series – which has combined a combined guaranteed prize pool of $8 million.

As usual, the series will conclude with the $1.5 million guaranteed Main Event on December 6th and the schedule includes the popular “2-Day Event” on December 5th/6th – which this series has a buy-in of $2,100 and guarantees $1 million in prize money.

The schedule for FTOPS XXIV does not include many changes from the events played when the series was last hosted in August, although a few tournaments have been brought forward or moved further back in the timetable based on their popularity in FTOPS XXIII.

Gone are the Courchevel event and a couple of the heads-up tournaments, and in their place is an additional NL Omaha Hi/Lo 6-Max tournament, a Knock-Out PL Omaha Hi event and a H.O.R.S.E. tournament – which will be played on the first Tuesday of the FTOPS series.

The regular leaderboard competition will again be running throughout the two weeks of FTOPS XXIV, with the first prize being entry into every FTOPS XXV tournament (except the two-day event) when the next series is played in the spring of 2014 (the approximate value is $10,000!).

Players, who want to emulate Rinat “FromPenzaWizLav” Lyapin´s achievement of topping the last FTOPS leaderboard competition, will have to display a variety of skills during FTOPS XXIV. Lyapin (who plays as “zapahzamazki” on PokerStars) cashed in eight of the thirty-nine events in the last series and appeared on three final tables (the Russian did not win any though!).

The dates have also been announced for miniFTOPS XXIV, which will run from Sunday January 5th until Sunday January 19th. The miniFTOPS schedule is exactly the same as the full series schedule, but buy-ins for the events are a tenth of the price of the full series, and January´s thirty-nine tournaments offer a combined guaranteed prize pool of $3 million.

The full schedules for both series can be found on the Full Tilt Poker web site and include links to instructions on how to play some of the less common games which appear in the schedules (“Irish” and “6-Card Omaha” for example), and explanations of the different formats the tournament games are played in – including the increasingly popular “escalator” tournaments.