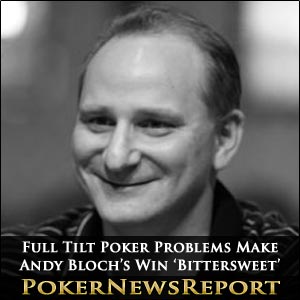 The 43-year-old veteran of many series had only just won his first gold bracelet after first cashing way back in 1996 at the 27th staging of the poker festival when he picked up $5,558 for taking ninth in the $1,500 buy-in Limit Seven-Card Stud event #3 at the Horseshoe Casino in Las Vegas.

But former Team Full Tilt member Bloch, while obviously thrilled by his “sweet” success in this year’s $1,500 buy-in Seven-Card Stud event #7 for $126,363, quickly turned his attention to the troubles facing millions of online poker players who have seen their accounts frozen at the collapsed poker website.

The Vegas-based pro – who can now move beyond the tag of ‘one of the best poker players without a WSOP bracelet’ – remembers the turmoil created by April 15 last year, when the US Department of Justice (DoJ) closed several poker rooms, including Full Tilt.

He is well aware that people have gone through absolute hell over the past year or so, with the uncertainty surrounding their frozen accounts – thought to amount to more than $400 million – still a major concern.

The Harvard and Massachusetts Institute of Technology (MIT) educated Bloch can’t ignore this, of course, and considers his victory somewhat bittersweet, coming just one day after his birthday – although he did offer some positive words, as well.

He continued by saying he wants to see the issue resolved in the right way, of course, with Full Tilt customers fully refunded, before possibly giving a slight hint as to some impending conclusion to the long-running FTP saga.

Bloch said he is hopeful that some kind of announcement will be made during the WSOP, although he quickly added that he didn’t know anything else.

Let’s hope I’m not reading too much into those last few statements from Andy. But we at Poker News Report would like nothing more than to see a satisfactory end to the troubles suffered by so many Full Tilt customers.

Finally, there’s some record-breaking news to bring you from the rooms of the Rio All-Suite Hotel & Casino in Vegas – the $1,500 buy-in Omaha Hi-Low Split-8 or Better event #8 hit 967 entries to set a new mark for this type of tournament.

The event kicked off on Friday with close to the thousand mark entered to easily surpass last year’s 925 for the same competition, adding over 4.5% to the field this time around, while also besting all live Omaha Hi-Lo Split competitions in poker history.

The leading 117 finishers – also the biggest number ever to win cash for this type of poker – shared a prize pool of $1,305,450, with $264,400 and a gold bracelet going to Alabama’s Herbert Tapscott, and even $2,480 entering the pockets of New York State’s Dan Santoro as the first exit after the money bubble burst.

Seven Out Of Seven For USA

Interestingly, Americans have won the first seven events to be completed in Vegas. This is definitely unexpected as most recent WSOPs have started with players from other countries snatching bracelets in early tournaments. However, two of the newly-crowned champions were born outside of the States.

California-based Chiab ‘Chip’ Saechao – who picked up $70,859 for winning the $500 buy-in Casino Employees No-Limit Hold’em event #1 – was born in Thailand before moving to the USA when aged 15, while Bulgarian-born Nick Jivkov didn’t move to the States until he was 12. The Illinois-based player collected $189,818 for taking down the $1,500 buy-in Pot-Limit Hold’em event #5.

The Other Five winners Are:

– Former NFL American football star linebacker with the Dallas Cowboys, Thomas ‘Hollywood’ Henderson, talking to Cory Zeidman, the eventual winner of the $1,500 buy-in Seven-Card Stud Hi-Low 8 or Better event #4 for $201,559, via mobile phone during a break in the final table that came to an end in the early hours of Friday.

My parents, they wanted to name me ‘Life’, but they thought it would be hard on me growing up with a name like that. So, instead, they named me ‘Leif’, which obviously isn’t much better. By the time I was, like, 12, basically everyone was making fun of me. You know, kids, when they’re young – they suck. They’re just like boys. Whatever. But, after that, it paid off. It was actually a cool name, and girls started liking it. In the end, it’s definitely worked out for the best.

– A delighted Leif Force, who won his gold bracelet in the first staging of the $3,000 buy-in Heads-Up No-Limit Hold’em/Pot-Limit Omaha event #3 for $207,708, has heard it all when it comes to jokes about his name.

This gold bracelet represents 15 years of grinding. This represents years of studying and trying to get better at this game. This represents everything me, my family, and my close friends have sacrificed in order to do what I love to do, which is to play poker.

– A sincere Nick Jivkov tells the gathered audience during his bracelet acceptance speech just how important his victory was in the $1,500 buy-in Pot-Limit Hold’em event #5 on Saturday that earned him $189,818.