Former Full Tilt Poker players from the US may still have to wait a very long time to see the money owed to them by the poker room. 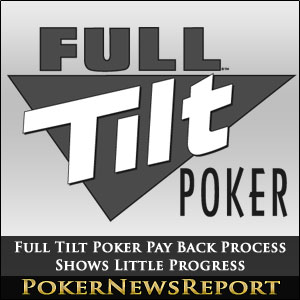 Former Full Tilt Poker players from the US may still have to wait a very long time to see the money owed to them by the poker room.

When Full Tilt Poker had its domain frozen by the US Department of Justice in April 2011, on the memorable day that became known as Black Friday, players’ accounts were frozen too. Since then, despite several promises from various bodies and authorities, no payouts have been forthcoming. When the DOJ announced that it had reached a three way deal with Poker Stars and Full Tilt Poker last year, former US players of FTP breathed a sigh of relief, believing that they’d soon be reunited with the millions in total owed to them.

However, it’s been slow going for these players who – two years later – are still facing a continued wait.  Even though the money was promised to these players several times, they are still waiting to see their cash.

The US government selected the claims administration firm Garden City Group to administer the Full Tilt Poker remission process, however recent reports from the online poker industry indicate that it could take another two years until players see any of their cash.

Difficulty in Creating a Payout Formula

One of the problems facing Garden City Group and which seems to be a major obstacle in the payout process is just how to create a formula that tracks the money due to individual players.  One of the things that need to be taken into account is whether the amount of money refunded to players will be based on deposits into accounts, existing balances or both. This seems to be the current ‘excuse’ that is being given out as a delay in making payments.

The Poker Players Alliance, the grassroots poker proponent group has called on the government to refund balances based on the player’s existing balance but the actual formula will not be known until it is announced.

The PPA has constantly offered the Department of Justice assistance with the remission process and PPA executives have met with internet law experts to discuss the issue.

When the government reached a deal with Poker Stars to purchase Full Tilt Poker’s assets, part of the agreement was that the DOJ will reimburse former US FTP players around $160 million of the forfeited funds.

Time will tell whether this is just another delay tactic of whether the players will finally see the money they have been waiting over two years for.