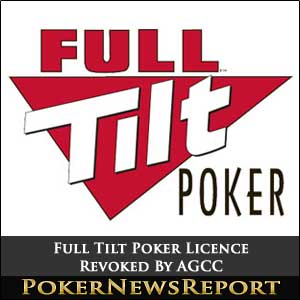 In the 26-page determination notice, the AGCC gave multiple reasons for permanently revoking the licence, including false reporting, unauthorised provision of credit, and failure to report material events.

The AGCC admitted in their statement that they had been misled by Full Tilt Poker about their operational integrity and by reporting that they had more substantial liquid funds than were physically available to the company following the bank accounts seizures by US authorities. They conclude their statement by saying that should Full Tilt Poker be taken over by new management and the licensing conditions met, the operating license could be reinstated.

The Full Text of the AGCC Statement

“AGCC Commissioners, sitting as a tribunal, have today revoked the licences of Vantage Limited, Filco Limited and Oxalic Limited, trading as Full Tilt Poker (FTP), with immediate effect.  This follows the earlier suspension of the licences on 29th June 2011.

At a hearing held in London over six days, it emerged that FTP had fundamentally misled AGCC about their operational integrity by continuously reporting as liquid funds balances that had been covertly seized or restrained by US authorities, or that were otherwise not actually available to the operator.  Serious breaches of AGCC regulations include false reporting, unauthorised provision of credit, and failure to report material events.

At the commencement of these proceedings on 26th July, AGCC made clear its preference to hold the hearing in public, to the benefit of players and media alike. However, the tribunal was persuaded that the hearing should be held in camera on the basis of claims by FTP that this would maximise the chance of a commercial rescue of the business for the benefit of players. For this reason an adjournment of 54 days was allowed.

It is important to note that the revocation of FTP’s licences does not, as has been suggested, prevent a reactivation of the business under new ownership and management. Unresolved claims by players against FTP become a matter for the police and civil authorities. Now that FTP’s licences have been revoked, AGCC no longer has jurisdiction over these companies.

As this statement has only just been announced, it will take time for the full significance of the determination notice to be absorbed. No doubt there will be a huge reaction to this kind news on Full Tilt Poker on the poker forums and in the mainstream media, and Poker News Report will cover that reaction as well as the consequences of the AGCC revocation order just as soon as it happens. Stay informed, follow Poker News Report on twitter!