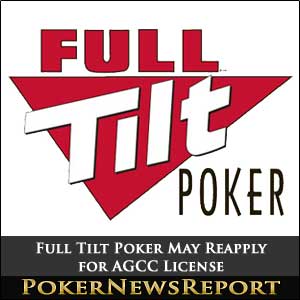 A lawyer for Group Bernard Tapie has stated that if negotiations are completed and the purchase of Full Tilt Poker by GBT is effectualized, it would make sense for Full Tilt to reapply for a gaming license with the Alderney Gaming Control Commission.

“Full Tilt Poker had a primary license with Alderney and still has a secondary license with the KGC,” said Tapie attorney Behnam Dayanim. “It makes sense from an efficiency perspective to continue those relationships. It would be our hope that under new ownership, we could have our AGCC license reinstated and continue our KGC license.”

Full Tilt’s gaming license had recently been revoked by the commission, who claimed they were misled by Full Tilt representatives. The AGCC made the mistake of trusting Full Tilt’s own accounting reports that funds were readily available without actually auditing the poker site. In reality, Full Tilt’s funds were not available due to mismanagement and several problems with third-party payment processors. Full Tilt’s secondary license is with the Kahnawake Gaming Commission in Canada, which is still a valid license.

Discussions between Full Tilt and Tapie are ongoing with the hope that a purchase will allow unpaid poker players to be paid and that the poker site can be up and running soon. By lying dormant for several weeks, FTP continues to lose money in operating expenses, not to mention exorbitant attorney fees in defending fraud and money laundering charges in addition to sale negotiations.

“We are focused on trying to effectuate some kind of transaction that will allow Full Tilt to continue forward as a viable European-facing entity as quickly as possible,”  Dayanim said. “We’re conscious of the fact that Full Tilt isn’t doing business. No company can sit idle forever.”

Purchase negotiations have included discussions of players owed large sums of money by Full Tilt to possibly being paid with equity as shareholders in the poker site, as well as current shareholders being included as owners. Many poker insiders are aghast at the possibility of Howard Lederer, Chris Ferguson and Rafael Furst continuing to lay claim as owners in the company in light of the fraud and money laundering allegations they are facing. GBT’s mouthpiece quickly responded to allay any fears of the current board of directors having an active role in running Full Tilt.

“What is clear, and is not up for debate, is that to the extent there is any interest from former owners, it would be a minority or passive interest,” Dayanim asserted. “There would be no continued involvement or oversight.”

Many who are owed money by the troubled poker site are eagerly following negotiations and wondering how much money the Tapie group would have to come up with to complete the purchase. It is widely believed that any sale price would include monies owed to players and any fines levied against Full Tilt for its various misdeeds in managing its operations. What is yet to be determined is if the Department of Justice will release any of the company’s funds that it has frozen in light of the Black Friday allegations to allow the purchase to proceed.

“The current arrangement with the company calls for the Tapie group to provide the lion’s share of the funding necessary for the rebooting of the site,” Dayanim added. “How much money is required to accomplish which objective depends on discussions with the DOJ and regulatory authorities.”

Also part of the sale negotiations is talk of whether the new owners will keep the Full Tilt name. The poker site’s brand name has been dragged through the mud with the Black Friday allegations and the additional amended civil charges filed last month in which Preet Bharara, U.S. Attorny for the Southern District of New York, accused Full Tilt and its board of directors of running a “global Ponzi scheme“. Whatever positive image the poker site may have had prior to these last few months has forever been tarnished.

“I do believe that the Tapie group sees value in the brand,” Dayanim said. “If the company is restored and people are confident that it’s being operated in a transparent way and players receive reimbursements, they’ll return to the site to play.”

Poker players have filed four class-action lawsuits against the beleaguered poker site in an attempt to force Full Tilt to pay back money owed to its once-loyal players. Dayanim insisted that those cases would not be an impediment to any sale of the company.

“The way we view those, generally, is that they’re seeking reimbursements to players,” he said. “One of the considerations that we’re actively trying to work through is how to arrange for the repayment of players.” In other words, the class-action lawsuits would be moot in the event of Full Tilt’s purchase because part of the negotiations include paying players with unpaid account balances.

Some observers have speculated as to whether the Full Tilt software and patent licensing for Full Tilt’s innovative Rush Poker game could possibly be purchased without including negotiations for player refunds. Dayanim insisted that this wasn’t the case and that a sale of Full Tilt to GBT will definitely involve returning money to players.