The lawyers representing a significant number of defendants named in the class action lawsuit filed against Full Tilt Poker have indicated that they want to step down from being “Attorneys of Record”. 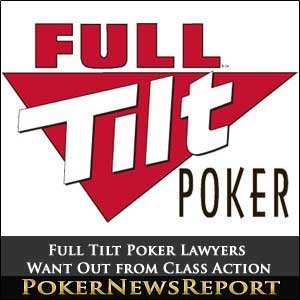 The lawyers representing a significant number of defendants named in the class action lawsuit filed against the owners of Full Tilt Poker have indicated that they want to step down from being “Attorneys of Record”.

Jeff Ifrah and David Deitch, the two senior partners of Ifrah Law PLLC, quoted in a motion made on Wednesday to the United States District Court for the Southern District of New York that “[C]ontinued representation of Defendants would create unreasonable difficulty for us to carry out our employment effectively and would result in an unreasonable financial burden to our law firm.”

Ifrah and Deitch had been representing some – but significantly not all – of the 24 defendants named in a class action lawsuit by four US poker players who demanded the return of their funds plus damages on the grounds of RICO – that the defendants were in breach of the Racketeer Influenced and Corrupt Organization Act 1961. This was the Act originally established in order that members of the Mafia could be prosecuted for ordering crimes to be committed, even when they did not actively commit them themselves.

Who Were Ifrah and Deitch Representing?

Jeff Ifrah and David Deitch had been named as Attorneys of Record for five companies associated with Full Tilt Poker Ltd (although they did not represent the company as named) and eight of the individual players who were known to have close association with these companies. Ifrah had previously filed a motion to dismiss the five companies and eight individuals from the lawsuit, but as this motion is unlikely to get heard until October, there is no public record of his reasons why.

The companies and individuals represented by Ifrah and Deitch were:-

In addition to Full Tilt Poker Ltd, the other defendants named in the class action lawsuit include Nelson Burtnick, Gus Hansen and Patrik Antonius – none of whom have legal representation in the case – and Phil Ivey and John Juanda who have engaged separate counsel. Ray Bittar (CEO of Tiltware LLC) was also independently named in the lawsuit and is believed to have separate counsel, although he and Ifrah have been working together in the defence of Tilt ware LLC.

What Does This Mean to the Full Tilt Poker Class Action Lawsuit?

At the moment nothing. Ifrah´s motion to dismiss his represented defendants will still be scheduled to proceed next month and, because Ifrah and Deitch cannot step down from defending the five companies and eight players until alternative representation is found, they may still be their Attorneys of Record at the time. Ifrah and Deitch also need court approval before they can relinquish their duties as attorneys – something which may take time to organise with the New York courts backed up with more pressing matters.

Why Have They Chosen Now to Withdraw?

Speculation about why Ifrah and Deitch have chosen to withdraw from the Full Tilt Poker class action is rife – and mostly sinister. Three main schools of thought exist – any of which could be true, or a combination of all three.

Full Tilt Poker have run out of Money – As Ifrah stated in his motion to step down on Wednesday, continuing to represent Full Tilt Poker “would result in an unreasonable financial burden to our law firm”. Does this mean that Full Tilt Poker can no longer afford to pay Messers Ifrah and Deitch? If so, this is a very worrying situation for everybody concerned about their “frozen” FTP funds.

It is a Delaying Tactic – If Ifrah and Deitch can organise new representation in time for the “dismiss motion” due to be heard in October, new counsel will play for time – claiming that they are unfamiliar with the case (they will be the only ones who are!) – and requesting re-scheduling of the hearing. This could have the effect of delaying this class action lawsuit, others which have been filed and the Department of Justice hearings by months if not longer.

Personal Safety Reasons – Jeff Ifrah has maintained a high, and very open, profile on the 2plus2 forum – requesting that ex-Full Tilt Poker players phone and email him directly. This might have been an own-goal in respect of Jeff Ifrah´s personal safety as this is America after all, and a map to where his offices are located is very visible on his web site. It could be that he has been personally threatened or attacked and is more concerned about his personal safety than the money he can still make from this case.

What Does This Mean For The Future?

Effectively, nothing is changing, yet. This motion to step down from the Full Tilt Poker class action lawsuit has no bearing on the re-scheduled hearing with the Alderney Gambling Control Commission as Full Tilt Poker are represented in the UK by Martin Heslop. Heslop will have his own problems following Full Tilt Poker´s meaningless statement earlier this week, but cannot use the Ifrah/Deitch motion to press for a further delay (even though Ifrah said this was the goal in an earlier statement this month).

Unfortunately, the wait goes on for poker players to find when, if ever, they will get their money back from Full Tilt Poker.