Chris Ferguson´s lawyer, Ian J. Imrich, is taking questions from ex-Full Tilt Poker players on his Facebook wall – but do not expect much in the way of answers! 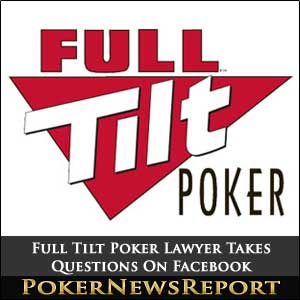 Chris Ferguson´s lawyer, Ian J. Imrich, is taking questions from ex-Full Tilt Poker players on his Facebook wall – but do not expect much in the way of answers!

Up until this week, Ian Imrich´s “wall” has just been used as a marketing vehicle for posting positive pieces of news about Full Tilt Poker and his client.

However, now it is available for everybody with an interest in the whereabouts of their online poker bankroll, the progress of the investor buy-out and (judging by the postings to date) how long Imrich believes his client will “rot in prison”. If you already have a Facebook account, you can go directly to Imrich´s wall by clicking here. If not, you will first have to create a Facebook account and then search for Ian J Imrich.

It is likely that Imrich will pursue this venture for about as long as Jeff Ifrah had a Q&A session on the TwoPlusTwo forum (Jeff Ifrah is the lead defence attorney for Full Tilt Poker and Poker Kings CEO Ray Bitar). His presence lasted four days after he was inundated with requests for information and only then referred interested parties to the (meaningless) Full Tilt Poker statements which were being issued at the time.

Ifrah is still answering the occasional email (jeff@ifrahlaw.com) and has recently been on QuadJacks Radio to defend his clients´ positions and deny allegations that Full Tilt Poker was a Ponzi scheme. However, as reported earlier this month, Jeff Ifrah still wants to step down from being Attorney of Record in the class action lawsuits filed against Full Tilt Poker by Todd Terry and the Consumer Law Group of Canada.

According to Jeff Ifrah, the “Letter of Intent” signed by a potential investor expires tomorrow (September 30th). Ifrah has claimed that the investor has been in talks with the Alderney Gaming Control Commission this week about extending the extension of Full Tilt Poker´s operating licence until such time as the investor has spoken with the US Department of Justice.

Claiming that any news might jeopardise the potential buy-out of the company (which may be the best result for the players still owed money), Ifrah and his partners are keeping quiet about the progress of the talks. Don´t expect much different from Mr Imrich!