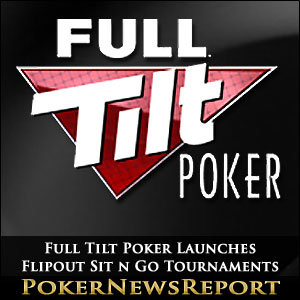 [geolink href=”https://www.pokernewsreport.com/full-tilt-poker”]Full Tilt Poker[/geolink] is never short of innovations to charm new players to its site, and its new “Flipout” multi-table Sit n Go tournaments promise to do just that when the new game format is launched tomorrow (Wednesday).

Flipout Sit n Go tournaments are a cross between Flip games – where every player is all-in every hand – and Shootout events, in which players win their way to a final table where the cash is shared out according to their finishing positions.

In Full Tilt Poker´s new “Flipout” Sit n Go tournaments, players will be all-in on their first hand and the winner from the initial “flip” will progress onto the final table – assured that they are already in the money. For example, in an eighty-one player “Flipout”, nine players would qualify for the final table and continue to play a “regular” Sit n Go to determine the destination of the prize money.

The Pros and Cons of Flipout Tournaments

The pros and cons of “Flipout” tournaments are fairly obvious. The pros are that players who win the “flip” part of the game are assured of cashing in the event – saving time and effort on the money bubble and starting the second phase of the tournament knowing that they have a min-cash locked up.

The con is that success in Flipout tournaments is purely down to luck. Players will have no control over how they play their opening hands (it is not an “All-in or Fold” game) until they reach the final table.

Detractors from the format would argue that a solid Sit n Go player would be better off player “regular” single table Sit n Go tournaments at three times the buy-in (or Double or Nothing at twice the buy-in), but Full Tilt Poker have not often been wrong when launching something new, and “Flipout” tournaments could ultimately be as successful as the site´s flagship Rush Poker product.

Multiple Formats and a Flipout Festival

To celebrate the introduction of Flipout tournaments, Full Tilt Poker is also hosting a four-day “Flipout Festival” from this Friday which will feature 108 tournaments with $25,000 in added prize money and other Full Tilt Poker benefits. The “Festival” includes Freeroll Sit n Go tournaments to get players accustomed to the format and possibly some other surprises still to be announced.