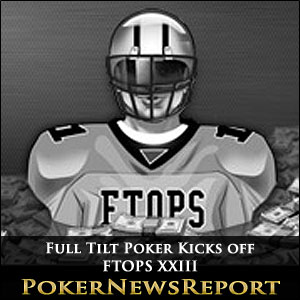 The series kicked off with a $215 buy-in no-limit hold’em tournament. As expected, Event #1 drew a fairly large field of over 3,500 players. When the smoke cleared it was acclaimed Birtish poker pro Chris “kid_bramm” Brammer who took down the title. Although Brammer has never won a bracelet or major event, he has proved a model of consistency, racking up an impressive array of five and six-figure scores throughout his five year career as a professional player.

Brammer was rewarded another six-figure payday for his efforts, this time in the amount of $130,000. It was his first FTOPS title.

After launching in 2006, the FTOPS has featured some of the brightest rising stars in online poker, many of whom became household names after securing an FTOPS title. Players like Matthew Waxman and Brian Mintz got their start by winning the FTOPS Main Event, and have since gone onto enjoy illustrious careers. With his victory, Brammer joins the ranks of an elite few who can claim proficiency in both live and online settings.

The FTOPS has been running since 2006, and typically takes place every three months. However, it did not run from May 2011 to December 2012, as at the time, Full Tilt Poker was in the midst of a scandal. Since that time, the site was purchased by PokerStars, and has since regained most of its credibility.

Event #2 of this year’s event, a $300 + $20 NLHE escalator was won by a player named “broskyprosky.” The victory was good for over $45k, although due to a deal made at the final table the second place finisher actually won slightly more prize money. Escalator tournaments feature increasingly longer blinds as the tournament progresses. This week’s tournament offerings will feature a variety of interesting formats including Rush, 5-card PLO tourney and NL Irish tourneys.

This year’s Main Event will boast a $635 buy-in (re-entry) and feature a whopping $1.5 million guarantee.