If ever there was a way in which not to endear yourselves to the thousands of people to whom you owe money, Full Tilt Poker have mastered it. 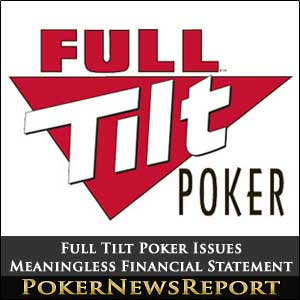 If ever there was a way in which not to endear yourselves to the thousands of people to whom you owe money, Full Tilt Poker have mastered it.

After publicly promising to maintain communication with the public with regard to a potential investor and the fate of the poker players´ funds, Full Tilt initially released a press release at the end of August with a loose overview of their financial plight.

The release contained nothing which was not widely known and failed to introduce any new information about if or when the online [geolink href=”https://www.pokernewsreport.com/online-poker-rooms”]poker site[/geolink] would be repaying the funds owed to its players.

These players, with 100s of $millions locked away in accounts which were not segregated from the company´s operating funds, were furious to learn that the latest statement leaked to PokerStrategy.com concerned a proposed “cost optimisation program”, and failed to address any of the issues relating to the whereabouts of the funds, the hearing with the AGCC to reinstate their licence or any news relating to an investor takeover.

The Text of the Statement

“On April 15th 2011 the United States Department of Justice unsealed a federal indictment against a number of individuals employed by major online poker operators. After the issuance of that indictment and a related civil case brought by the United States government, Full Tilt Poker withdrew from the US market. Then in a related action, on June 29th, 2011, Full Tilt Poker had its operating licenses suspended by the Alderney Gambling Control Commission.

As a result, Pocket Kings Ltd. (provider of marketing and technology services to Full Tilt Poker) has adopted a cost optimization program and estimates that they need to reduce their costs by approximately €12m. This program is intended to streamline the company’s operations in order to better position itself for future growth and profitability in Full Tilt Poker’s markets outside of the U.S.

If all of the required cost savings were to be achieved through redundancies, approximately 250 positions could be affected; however the exact number cannot be confirmed until the conclusion of a consultation process with its workforce.

Notwithstanding the foregoing, Pocket Kings firmly believes it has a very strong future in Full Tilt Poker’s Non-US Markets, and is fully committed to ensuring Full Tilt Poker restores the site and repay players in full. To this end, Full Tilt Poker has retained Sea Port Group Securities, LLC as its financial advisor with regard to raising capital and/or assisting in securing a strategic partner in order to fund continued operations of Full Tilt Poker’s non-U.S. business. The Company is in active discussions with several parties and will provide a further statement in due course.”

Early Reaction to the Statement

Ex-Full Tilt Poker players who had read the statement expressed a mixture of anger and resignation over the release of this meaningless communication. With other factors such as Full Tilt Poker requesting a further adjournment of the AGCC hearing and their solicitors indicating that they no longer wish to defend the company in the class action lawsuits made against them in New York, the consensus of opinion is that the directors and shareholders of the company will bleed as much time and money as they can from the company before declaring Chapter 11 bankruptcy, and creditors (players) will only receive a percentage of the funds owed to them.

This speculation could all change on Monday after the AGCC hearing, but for the present it looks as if nothing of any value remains at Full Tilt Poker – least of all their promises to their players!