Full Tilt Poker has been hit with a new class action – and this time the lawyers will not be rubbing their hands with glee! 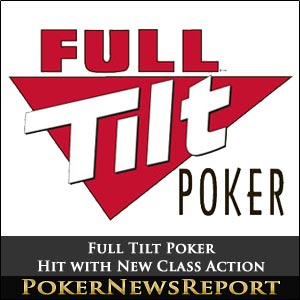 Full Tilt Poker has been hit with a new class action – and this time the lawyers will not be rubbing their hands with greed glee!

Forbes has reported that Lary Kennedy and Greg Omotoy have filed a complaint against the troubled online poker site, claiming $900 million in damages and naming (in addition to the usual suspects) legal firm Cozen O’Connor among the defendants.

The suit, which was filed in the U.S. District Court for the Central District of California last Monday, alleges that the law firm received more than $2 million in fees for orchestrating a money laundering scheme which allowed Full Tilt Poker to continue operating after Black Monday. It also claims that Cozen O´Connor knew, or had reason to know, that the fees were derived from illegal sources and that it should now repay those fees to the plaintiffs.

Although the class action names Kennedy and Omotoy as lead plaintiffs, the action enables up to 200,000 ex-Full Tilt Poker players to add their names to the lawsuit in the pursuit of damages. Complaining that Full Tilt Poker  “did not create financial reserves for amounts held on behalf of players, but instead distributed the money for operational expenses, marketing expenses, fees and losses arising from money laundering … and massive distributions to the individual defendants,” the lawsuit also names Chris Ferguson’s lawyer, Ian Imrich, among the defendants.

This new class action just adds to the woes of potential investor Laurent Tapie in a week in which he was heavily criticised for trying to get everybody else to put money into Full Tilt Poker other than himself. It was also revealed that the Alderney Gambling Control Commission had inaccurately reported the amount seized by the US Department of Justice and a current Full Tilt Poker spoke out employee spoke out on a Swedish poker forum to state that two-thirds of the staff have left the company before they were made redundant, while morale among the others was at an all-time low (The employee also revealed that Chris Ferguson is most days found on Ray Bitar´s office couch in Dublin).

Precedents Exist for a Successful Claim

Legal precedents exist in the USA for the pursuit of damages from those who profited from an illegal operation, and not just those directly responsible for “a pattern of racketeering, brazen money-laundering and more”.  The lawyer representing Kennedy and Omotoy quotes the 2010 decision from the U.S. Court of Appeals in the case of FTC v. Network Services Depot as a precedent for claiming money back from third-party beneficiaries, and many of the investors who made money from Bernie Madoff´s Ponzi scheme have also been made to repay their profits to those who were scammed. The more sources that can be found who have benefitted from Full Tilt Poker´s illegal operations, the more chance there is of players having their bankrolls refunded.