Tuesday was another disappointing day for followers of the Full Tilt Poker saga, with no news forthcoming from either party after the Alderney Gaming Control Commission hearing was adjourned for a further day. 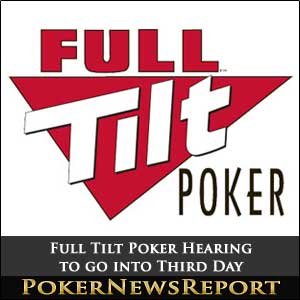 Tuesday was another disappointing day for followers of the Full Tilt Poker saga, with no news forthcoming from either party after the Alderney Gaming Control Commission hearing was adjourned for a further day.

The lack of news is becoming a feature of these hearings, and with thousands of online poker players around the world waiting to hear about the fate of their bankrolls, the failure to make any sort of comment demonstrates the disrespectful nature of both Full Tilt Poker and the Alderney Gaming Control Commission (AGCC) towards those who are paying for these hearings, the executive lunches and expensive London accommodation – the ex-Full Tilt Poker players!

Security guards were posted outside the doors of the conference suite in which the hearing was being held as a demonstrable sign that if any disgruntled ex-players did turn up they would not be admitted to the hearing. Although a handful of interested parties did make an appearance – one in particular trying to gain access by posing as a businessman planning his own private conference – there was nothing to hear and nothing to see.

Is the Hearing Meaningless Now Anyway?

After the hearing was adjourned for Day 2, the news broke of the amendments to the DoJ indictments in New York, also stating that Full Tilt Poker is a Ponzi scheme. This was probably the worst possible scenario for Full Tilt Poker, as it is understood that the Department of Justice will be seizing all Full Tilt Poker assets (assuming the charges are proven) plus the personal assets of the company directors. With the news that that Full Tilt Poker was undercapitalised by $330 million before Black Friday, it is unlikely that they will be able to pull the wool over the eyes of the AGCC again, and explains why the company wanted the hearing held in private – to prevent any of their accounting issues being revealed publicly.

Whereas it was believed that the AGCC would extend the suspension of Full Tilt Poker´s operating license, there is the real chance now that it will be permanently revoked.  The AGCC may well have been negligent in allowing Full Tilt Poker to continue running after April 15th – although it is more likely that they were fooled into allowing the company to operate – but now would be the perfect opportunity for the commission to regain some of the credibility it has lost by baring its teeth and closing Full Tilt Poker for good.

Will There be A Conclusion Today?

The conference suites at the Riverbank Park Plaza Hotel are booked until the close of business today (Wednesday). An announcement from the AGCC is expected at the end of the hearing and Poker News Report will bring you the latest poker news in respect of the hearing just as soon as it becomes available.