No news today from the Alderney Gaming Control Commission (AGCC) whether they are going to permanently revoke Full Tilt Poker´s operation licence. 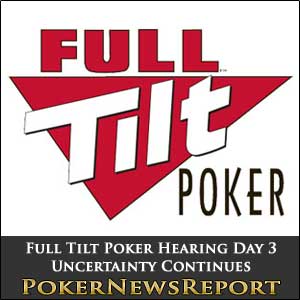 Despite rumour and counter rumour, no news has been forthcoming today from the Alderney Gaming Control Commission (AGCC) in respect whether they are going to permanently revoke Full Tilt Poker´s operation licence.

Again, it would appear, the AGCC are incapable of keeping promises to respect the best interests of FTP’s customers, and have left players clinging to hope that the suspension of the operating licence will be extended (rather than revoked) in order to enable negotiations with a potential French investor to conclude.

Throughout Wednesday night, a story emerged that a French investor (strongly speculated to be the Partouche Group) had been in negotiations with Full Tilt Poker, the US Department of Justice (DoJ) and the AGCC since the middle of August. Claims were made in the reports of this new development that the investor had signed a Letter of Intent to purchase the company in a deal which would provided the funds to allow the repayment of account balances to all Full Tilt Poker players worldwide. The deal was expected to be closed by the end of September subject to the decision of the AGCC and, with no news being released today by the AGCC, this deal must also be in the balance.

Contradictory reports which appeared on rival poker news web sites throughout the night also claimed that either an extension of the license had been negotiated, or that the AGCC had already made their decision to revoke Full Tilt Poker´s operating licence. One site in particular was so certain that the news was being temporarily withheld to enable Full Tilt Poker to advise their staff that they no longer had jobs, that it published the story and then had to retract it – claiming that the AGCC had originally planned to revoke FTP´s license and then had a change of heart.  Neither a revocation or extension of the license suspension has been confirmed – and neither outcome is likely now until at least 10.00 (GMT) tomorrow.

Will the Lawyer´s Prayers Be Answered?

An incredible attempt at a last minute stay of execution was orchestrated by one of Full Tilt Poker´s lawyers – Jeff Ifrah. Ifrah, who has already indicated that he wishes to step down from defending Full Tilt Poker in the civil trial initiated by Todd Terry, went on the twoplustwo forum to seek assistance from members to lobby the AGCC by email for an extension to the suspension of the license, rather than full revocation. Admitting that it was a “Hail Mary” call to action, and confirming that there were still ongoing talks with serious potential investors, Ifrah persuaded several hundred members to submit emails to the AGCC but, as one twoplustwo wag commented “Classy of FTP to request a private hearing and then ask the public to take action”.

There are many possible scenarios which could still occur.

The French investor could proceed with the purchase of Full Tilt Poker´s assets and go through their own application for an operating license irrespective of the AGCC decision.

Alternatively, a revocation could kill the deal altogether.  The unfortunate use of Full Tilt Poker Ponzi Scheme by US Attorney Preet Bharara could quash any hope of [geolink href=”https://www.pokernewsreport.com/us-poker-sites”]online poker in the US[/geolink] for the foreseeable future, or may be a wake-up call to the US Government to regulate (and tax) online poker in the same way as has successfully been done throughout Europe. Until the AGCC´s decision is announced, and the effect this has on the way in which the DoJ charges are handled is known, the Full Tilt Poker saga will continue to roll on and on.