Full Tilt Poker have declared open season on the highest volume online poker cash players by announcing a VIP Amnesty and the re-launch of the FTP Black Card. 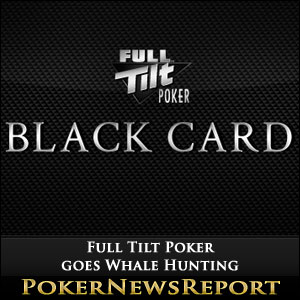 Full Tilt Poker have declared open season on the highest volume online poker cash players by announcing a VIP Amnesty and the re-launch of the FTP Black Card.

It is no secret that the volume of action of Full Tilt Poker´s cash tables has been in decline since the site went back online in November and, in an aggressive move to reverse that trend, Full Tilt Poker announced yesterday that it would offer a ‘VIP Amnesty’ to online cash game players on other poker sites.

The ‘Amnesty’ will enable players who have reached high reward levels elsewhere – and who may be reluctant to forgo their VIP Status on other poker sites – to transfer their VIP Status to the equivalent status under the Full Tilt Poker ‘Edge’ loyalty program.

We understand that players have put many hours, weeks and sometimes months into earning their VIP status on other sites while unable to play on Full Tilt Poker. The amnesty will allow them to trial our Edge Rewards and Black Card programs at the equivalent level and see for themselves the superior benefits their play level offers at Full Tilt Poker.

The Return of the Black Card

The FTP Black Card was once one of the most cherished symbols of online poker success and to earn it you had to be a consistently high-level grinder. Players would have to earn 50,000 Full Tilt Points over a 100-day qualifying period to receive a Full Tilt Poker Black Card and could easily have their status stripped away if they fell below an average of 500 points-a-day.

For many players the reward was worth the effort, as the benefits of Black Card ownership were immense and included enhanced cash rewards, double Full Tilt Points, personalised customer support and VIP treatment at live poker events – including the World Series of Poker´s Pro-Choice VIP Lounge.

The revised Full Tilt Poker Black Card is due to be re-launched in July and will offer performance-based Full Tilt sponsorships based on results between now and then. Over the next few weeks we will be reaching out to the poker community to help us design these performance metrics, said Sarne Lightman, We want the players who will be competing for sponsorship to design the measurement systems for their performance, and we will then reward the best players.

Want to be an FTP Whale?

In order to qualify for the Full Tilt Poker ‘VIP Amnesty’ players need to send photographic evidence of their VIP status from another site (the screenshot must include the player´s username) and their Full Tilt username to BlackCard@fulltiltpoker.com before the end of April 2013. The Full Tilt account will then be upgraded to the equivalent Edge Status. If yet-to-be-announced play requirements are maintained, players may be upgraded to Black Card member status once the Black Card level is live.