For one week only Full Tilt Poker has doubled the guaranteed prize pools on all midweek MTTs and introduced an re-entry option for players knocked out early. 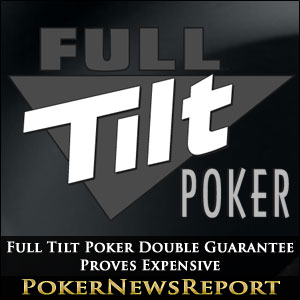 Full Tilt Poker has made some significant changes to its online poker tournament structure from Monday 11th of February to Friday 15th February in an attempt to attract more players into its midweek tournaments. Any tournament which had a guarantee already in place – and was not an existing multi-entry event – has had its guaranteed prize pool doubled.

Full Tilt had hoped that the introduction of a re-buy option for players knocked out while late registration was still available would help pay for their “generosity”; but Plan A seems to have backfired and the majority of the guaranteed prize pool tournament on Full Tilt Poker yesterday (Monday) failed to reach their enhanced guaranteed value.

Incredibly, one of the most under-subscribed tournaments was the $3.30 buy-in $20,000 guaranteed Rush Poker tournament which started just after 9.30pm (GMT) last night and attracted 1,415 entries. Once all the re-buys and add-ons were taken into account, those who cashed in the event shared an overlay of more than $5,000!

Get Involved While You Can!

Obviously this promotion is going to cost Full Tilt Poker tens of thousands of dollars over the rest of the week and – if the overlays continue – is unlikely to be repeated in the future. Online poker tournament players who appreciate a little extra value should get involved while the money is still on the tables and take advantage of FTP´s Double Guarantee Promotion this week.