The Alderney Gambling Control Commission (AGCC) has commissioned an independent review committee to assess their actions that saw Full Tilt Poker’s licences revoked and suspended back in September. 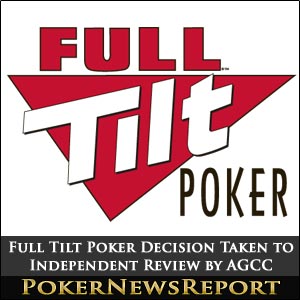 The Alderney Gambling Control Commission (AGCC) has commissioned an independent review committee to assess their actions that saw Full Tilt Poker’s licences revoked and suspended back in September.

[geolink href=”https://www.pokernewsreport.com/full-tilt-poker”]Full Tilt Poker[/geolink] (FTP) have not had their troubles to seek after they were shut down by the US Department of Justice (DoJ) back in April this year, have struggled to repay seized bank accounts and have also recently seen claims made by shareholders, board members and famous players – including co-founder Ray Bitar and shareholder pro Chris ‘Jesus’ Ferguson – as they attempt to access their accounts.

The committee will be led by Peter Dean CBE, the British Gambling Commission’s former chairman, with the AGCC stating in a media release that the review has been established “to provide full transparency”.

Dean, who between 1990 and 1997 was the United Kingdom’s Monopolies and Mergers Commission deputy chairman and was also the investment ombudsman with the Investment Management Regulatory Organisation (IMRO) from 1996 until 2001, will provide his report some time before the close of March next year.

André Wilsenach, the AGCC’s executive director, said: “As soon as we became aware that there were possible irregularities in relation to FTP’s operational integrity, AGCC acted to discharge fully our statutory obligations.

“We believe we acted appropriately and fairly at all times, but – following our own internal assessment and the inevitable questions that have been raised by third parties – the commission decided that it is in the best interests of players, licence holders and AGCC itself to commission an independent review and to make the outcome public.

“I am delighted that Peter Dean has agreed to conduct the review. He has many years of experience at the top of the British Gambling Commission and commands wide respect from operators and regulators alike.

“He has been asked to review fully the actions taken by AGCC in respect of FTP and to focus specifically on the appropriateness, timeliness and fairness of those actions.”

Stay informed on the latest Full Tilt Poker News by following us on Twitter.