The anxiety level of Full Tilt Poker players has been slowly rising for the past ten days as news regarding the sale of the troubled poker site to Group Bernard Tapie (GBT) hangs in limbo with no new word from the Department of Justice (DoJ) or GBT on when player repayment will commence. 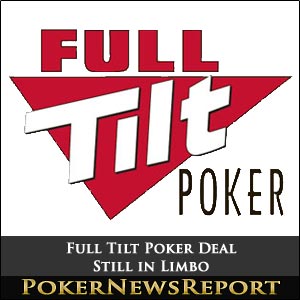 The anxiety level of Full Tilt Poker players has been slowly rising for the past ten days as news regarding the sale of the troubled poker site to Group Bernard Tapie (GBT) hangs in limbo with no new word from the Department of Justice (DoJ) or GBT on when player repayment will commence.

“We are waiting to hear back from the DoJ and still hoping to finalize an agreement,” said GBT attorney Behnam Dayanim. “It takes time. We have an oral understanding with the DoJ that we’re trying to reduce to writing.”

Just ten days ago, Full Tilt players were excited and optimistic that their frozen account balances would eventually be returned as Dayanim gave a timeline of two weeks in which he optimistically hoped that an agreement with the DoJ could be reached. As the days march on without a solid deal in place, players begin to wonder if the sale of Full Tilt and the reimbursement of players is nothing but smoke and mirrors.

“I’m still optimistic it will get done quickly,” Dayanim said. “Certain factors are outside of our control, but the estimate Laurent gave [two weeks] is a reasonable one.” Following an agreement with the DoJ, Tapie’s group will have to finalize acquisition terms with Full Tilt Poker. It is expected that Full Tilt’s board of directors will be required to approve any sale.

In an email that was sent from Full Tilt CEO Ray Bitar to company shareholders earlier this month that also saw extensive online circulation among the poker industry, the DoJ would most likely assume responsibility for reimbursing U.S. players, while GBT would handle the refunds of players throughout the rest of the world [ROW]. Dayanim gave reasons for the separation of the two player pools.

“There are two big differences between U.S. and Rest-of-World players,” the GBT lawyer said. “One difference is that the DoJ views the activity of Full Tilt in offering wagers to U.S. players as being unlawful. It doesn’t take that view with ROW players.”

Regarding the second difference between American and ROW players, Dayanim said, “From Tapie’s perspective, there’s a difference in that the ROW players will continue to be players with a re-launched site. Contrastingly, Tapie will have no further interaction with U.S. players.”

In addition to being reimbursed for their Full Tilt accounts, many players are curious as to how long it would take for Full Tilt to be up and running again and accepting wagers from non-U.S. players.

“It’s a two-step process,” Dayanim was quick to explain. “The first step is an agreement with the DoJ. The next step is an agreement between Full Tilt and Tapie. We still need to get the first step done. Then, there needs to be a period of due diligence. Once that period closes, if we close on the acquisition, then we’ll be able to get the site running in short order. In terms of reimbursing players, it all depends on the details of the agreement with the DoJ.”

The recent court papers filed by Full Tilt board member Chris Ferguson that lay claim to the players’ funds seized by the government are expected to have no bearing on Full Tilt sale negotiations.

“We had no involvement in the filing of the claims, but we were aware that they were being filed,” Dayanim said. “The claims present no concern to us, and likewise present no concern with respect to our ongoing negotiations with the DoJ.”