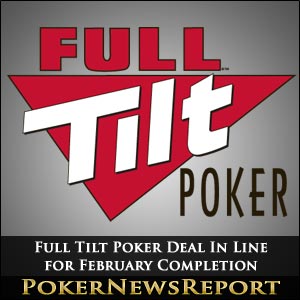 In fact, during an interview with online gaming journal iGaming France, GBT managing director Laurent Tapie – who is the son of company founder Bernard Tapie – stated that they “hope to do the deal by the end of February”.

Full Tilt was caught up in the troubles that hit online poker in the USA back on April 15, Black Friday, when the poker room was shut down – along with the likes of PokerStars and Absolute Poker – by the US Department of Justice (DoJ) due to charges relating to illegal gambling, money laundering and bank fraud.

However, 36-year-old Laurent revealed that, with “the due diligence process nearly complete,” the deal to buy Full Tilt should be completed by the end of next month, “unless there are last-minute surprises.”

He also added that “the agreement has been validated” that will see GBT reactivate Full Tilt’s operating licence with the Alderney Gambling Control Commission (AGCC) after they acquire Full Tilt’s assets from the DoJ for an estimated $80 million.

Meanwhile, after what has been a fairly quiet few weeks in relation to the beleaguered poker room, US Federal Judge Leonard B Sand has dismissed the class action complaint registered by four poker pros against Full Tilt.

The four plaintiffs had accused those defendants of bank and wire fraud, and racketeering that should warrant them to triple the damages.

Evidence Unclear Over Who is Responsible

But Judge Sand dismissed the Racketeer Influenced and Corrupt Organizations Act (RICO) claim in the New York court, pointing out that it was unclear whether the players’ failure to receive funds was due to the DoJ’s actions, the firms listed above or the individual defendants named.

He said: “The mere fact that Full Tilt Poker customers maintained player accounts on the website that they subsequently could not access is therefore insufficient to establish a conversion claim against these defendants.

“Nor have plaintiffs alleged any additional facts, demonstrating that either company exercised control over the player accounts, or played any role in the decision to prevent Full Tilt Poker customers from withdrawing the money in their accounts.”

Sand’s summation also pointed out that, although the claim can still continue against Filco, Pocket Kings and Vantage Ltd, it can’t proceed against the original complaint’s individuals.

Sand added: “Plaintiffs have pled sufficient facts to establish a plausible inference that defendants Pocket Kings, Vantage and Filco ‘played some role’ in the conversion.

“We therefore deny defendants’ motion to dismiss the conversion claims against defendants Pocket Kings, Vantage and Filco, but grant it with respect to Tiltware and Pocket Kings Consulting.”