Reports have been circulating around that the conclusion of the takeover of Full Tilt Poker by Groupe Bernard Tapie (GBT) is being finalised by March 16th. 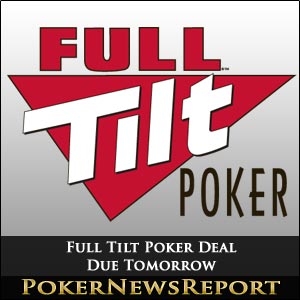 Reports have been circulating around several subscription web sites that the conclusion of the takeover of Full Tilt Poker by Groupe Bernard Tapie (GBT) is imminent – with one site stating that connections are confident of the deal being finalised by tomorrow (March 16th).

Although a deal was signed to purchase Full Tilt Poker for $80 million in February, there were certain conditions attached to the transaction – most noticeably that players who had borrowed millions of dollars from Full Tilt Poker repaid the funds owed to the company. It would seem that sufficient players have chipped up to make the deal happen.

March 16th was the extended deadline given by GBT attorney Behnam Dayanim gave when talks with various debtors (players who owed Full Tilt Poker money) collapsed at the end of February. No doubt pressure would have been placed on those players who remained “recalcitrant” at the time to make the deal happen, and several high profile players were publicly named and shamed (Barry Greenstein, Mike ‘The Mouth’ Matusow, Erick Lindgren, David Benyamine and Phil Ivey) for delaying the Full Tilt sale at the beginning of February.

According to one of the news sources, renewed optimism is justified on the grounds that Laurent Tapie – CEO of Groupe Bernard Tapie – has already put key people in place for when the site re-opens, has been in independent talks with the Alderney Gambling Control Commission (so, that´s a done deal!) and has applied for a licence to operate in Spain (where new legislation for poker was introduce at the beginning of 2012). It is claimed that Tapie also has an external investor in place to introduce sufficient funds to repay all the ex-Full Tilt Poker players who wish to withdraw their bankrolls!

When Can We Log In to Full Tilt Poker?

Although news of the deal being completed may be officially announced tomorrow, it is expected to take up to four weeks for the site to re-open – they have to remove certain images from the home page for a start! This would mean that Full Tilt Poker could be open from business one year to the day after Black Friday. Of course there will not be any Americans playing on the site for a while, but it is expected that many thousands of players will be attracted back to the site by the novelty value alone, in addition to any promotional offers put in place by the company.

Bookmark us to stay informed on the latest Full Tilt Poker news, or follow Poker News Report on Twitter.