In negotiations to purchase the assets of Full Tilt Poker, the DoJ has conceded to allow Tapie to re-enter the U.S. market if online poker becomes regulated in the U.S. 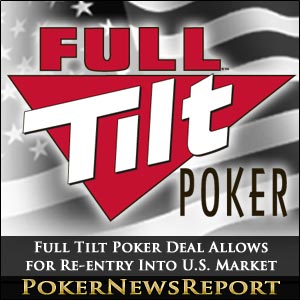 In negotiations to purchase the assets of Full Tilt Poker for $80 million, the Department of Justice has conceded to allow Group Bernard Tapie to re-enter the U.S. marketplace if online poker becomes regulated in the U.S.

Jeff Ifrah, one of the attorneys for [geolink href=”https://www.pokernewsreport.com/full-tilt-poker”]Full Tilt Poker[/geolink] (FTP), said that Group Bernard Tapie (GBT), as the new owners of FTP, will still need to apply for proper licensing and obtain approval from whatever U.S. regulating body will be in charge of those procedures. But, the agreement specifically permits Full Tilt to seek a poker site operators license in the U.S.

It is believed that PokerStars and Absolute Poker/Ultimatebet, the other [geolink href=”https://www.pokernewsreport.com/online-poker-rooms”]poker sites[/geolink] indicted on Black Friday, have no such deal to again be permitted re-entry into the U.S. market. While PokerStars appears to be thriving well as the world’s largest poker site in providing services to only non-U.S. players, the Cereus Network, on which Ultimatebet and Absolute Poker can be found, is struggling for its very survival having lost 99% of its customer traffic. The U.S. market is responsible for building the industry of online poker globally, and being given the green light to once again offer services in the American market is undoubtedly a huge factor in GBT’s decision to acquire the troubled poker site.

Many wonder why GBT would get involved in purchasing a company confronting the problems that FTP currently faces. In addition to securing the permission to possibly enter the [geolink href=”https://www.pokernewsreport.com/us-poker-sites”]U.S. poker[/geolink] marketplace, there are other viable reasons. FTP is a distressed asset and smart businessmen such as Bernard Tapie are knowledgeable in knopwing what type of distressed assets can be had at bargain prices and can be turned around at a future date when situations improve. With Tapie’s history of purchasing underperforming companies and returning them to profitability, as he did with Adidas, the acquisition of FTP seems to make sense. The $80 million sale price plus the money owed to non-U.S. players is considerably lower than the gap of $330 million that the DOJ calculated between FTP’s accounts and its money owed to players, so a once hugely successful and profitable business is actually being acquired at a cheap price. Even if FTP never regains its former ranking as the world’s second largest poker room, it still can benefit from a decent share of the market on name recognition if the new owners can please customers upon its re-launching, especially with access to American customers.

Another solid reason for GBT to purchase FTP is the software. The FTP software stood heads above the competition in innovation. From the always changing tournament varieties to new interface features and the implementation of new game forms such as Rush Poker, FTP always excelled at software development creativity. Rush Poker standing alone makes FTP software more valuable than starting a new poker site from scratch.

Many poker insiders believe that the sale of FTP to GBT, including the involvement of the DoJ in asset forfeiture and player fund reimbursement, will allow FTP to reapply, and easily obtain, its operating license from the Alderney Gaming Commission, which was revoked earlier this year. However, for the acquisition negotiations to progress further, the FTP shareholders must now give their approval of the forfeiture of assets to the DoJ, who will then sell the company to GBT.