Full Tilt Poker CEO Ray Bitar, one of the leading perpetrators in the biggest online poker scandals ever, was yesterday arrested at New York´s JFK airport. 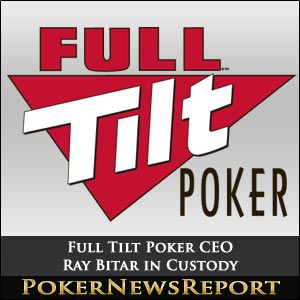 Ray Bitar, CEO of Full Tilt Poker and one of the leading perpetrators in the biggest online poker scandals of all time, was yesterday arrested at New York´s JFK airport as new charges were added to the existing “Black Friday” indictment accusing Bitar of operating an illegal gambling business in contravention of UIGEA, wire fraud and money laundering.

Although Bitar and his lawyer, Jack Baumann, arrived in New York from Dublin with the intention of surrendering to FBI agents – and had advised the US District Court in advance of his arrival – neither man was prepared for the scene of agents boarding the plane and arresting Bitar before he had a chance to unpack his duty free.

Further shocks were in store for the second most despised man in poker after Daniel Negreanu Howard Lederer, when new indictments were unsealed accusing Bitar of four new felonies related to missing player funds. Whereas he had voluntarily returned to New York for a relative slap on the wrist, Bitar – if found guilty of the charges brought against him – could face a prison term of 145 years.

The day got worse for Bitar when his request for bail of $250K was denied and instead Magistrate Judge Debra Freeman imposed bail conditions of $2.4 million, of which $1 million had to be paid in cash, and the surrender of his passport. Bitar, who was watched from the public gallery by members of his family, was remanded in custody until such time as the new bail conditions were met.

Press Statements from Bitar and his Lawyer

In a prepared statement read to the assembled media after the court hearing Bitar had written;

Today, I returned voluntarily to the U.S. from Full Tilt’s headquarters in Ireland to face the charges against me. I know that a lot of people are very angry at me. I understand why. Full Tilt should never have gotten into a position where it could not repay player funds. For the last 15 months, I have worked hard on possible solutions to get the players repaid. Returning today is part of that process. I believe we are near the end of a very long road, and I will continue to do whatever is required to get the players repaid.  I hope that will happen soon. Thank you.

Jack Baumann – Bitar´s lawyer – also had words for the press;

This morning, Ray Bitar voluntarily surrendered to U.S. authorities in order to face charges relating to the internet poker company Full Tilt Poker. We had previously informed the United States Attorney’s Office and the Federal Bureau of Investigation that Ray and I would be arriving at J.F.K. on a flight from Europe, and Ray’s surrender took place at the airport in my presence and without incident.

Since last April, Mr. Bitar has been in Ireland, where he has continued to act as full Tilt’s CEO, a position he still holds. As has been widely reported, when Full Tilt’s operations were shut down last year, it was not able to refund money it was holding in player´s accounts. Through the company, Mr Bitar has been working to get Full Tilt’s players repaid. Arranging for those repayments has been, and remains his top priority.

We thank the United States Attorneys office for its courtesy and assistance in coordinating Mr. Bitar’s surrender. We hope that we will be able to resolve Mr. Bitar’s remaining legal issues in a way that is satisfying to all parties.

Bharara Can´t Wait to Use the “P” Word Again

With today’s arrest and the new charges brought against him, Raymond Bitar will now be held criminally responsible for the alleged fraud he perpetrated on his U.S. customers that cost them hundreds of millions of dollars.  The indictment alleges how Bitar bluffed his player-customers and fixed the game against them as part of an international Ponzi scheme that left players empty-handed.

Bitar and Full Tilt Poker persisted in soliciting U.S. gamblers long after such conduct was outlawed. As alleged, Bitar has already been charged with defrauding banks to conceal the illegal gambling.  Now he stands accused of defrauding Full Tilt’s customers by concealing its cash-poor condition and paying off early creditors with deposits from later customers. The on-line casino became an Internet Ponzi scheme.

The remaining employees at Full Tilt Poker´s headquarters in Dublin had been pre-warned of Bitar´s return to New York and his impending arrest. Interestingly, he mentioned in his email that July salaries were going to be paid by PokerStars – an admission which has led to further speculation about ongoing discussions between PokerStars and the US Department of Justice and how soon poker players who lost funds in the Full Tilt Poker scandal might be repaid. Bitar´s email –

By now you probably have heard that I have returned to the US to deal with civil and criminal cases that are pending against me in New York. We have all worked hard over the last 15 months to preserve Full Tilt’s assets and potential in order to provide for the repayment of all players, and that continues to be our top priority. It is as important as ever that we all do everything possible to make that happen and, hopefully our deal with Poker Stars will very soon make our goal a reality. My return to the US is part of this process.

I am particularly grateful to all of you here in Dublin for your hard work, patience and understanding during this difficult time. I believe that your hard work and dedication should not go unrecognized, and we have made arrangements for Poker Stars to guarantee all July salaries. You should therefore have no concern about coming to work during this period. After that, we expect that your employment contracts will be assumed by the buyer of the company’s assets.

Bitar concluded his email by saying he expected to be available by phone and email from Monday evening – he omitted to say that communication might depend on if you can get Wi-Fi on Riker´s Island!

One Reply to “Full Tilt Poker CEO Bitar in Custody”