In an extraordinary Europe-wide canvassing operation, media organisations associated with Groupe Bernard Tapie have been contacting ex-Full Tilt Poker players by telephone to ask them how they would like to be paid back. 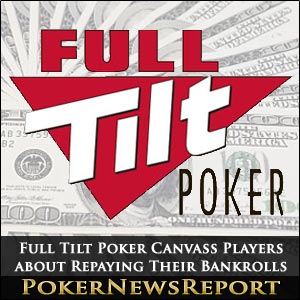 In an extraordinary Europe-wide canvassing operation, media organisations associated with Groupe Bernard Tapie have been contacting ex-Full Tilt Poker players by telephone to ask them how they would like to be paid back.

Although this seems like fantastic news for anybody with a bankroll frozen on the Full Tilt Poker web site, there are – of course – strings attached.

The Motive behind the Canvas

The telephone canvasser has been asking the online poker player “warm-up” questions such as:-

Once they have built up a rapport with the interviewee, the canvasser then states that there is a “rumour” that Full Tilt Poker could open again within a matter of weeks, and asks which of the following options the player would prefer as a means of releasing their Full Tilt Poker bankroll.

The canvasser quickly adds that option number three has been the favoured response to date.

Tapie Still Trying to Avoid Putting Any Money In?

The impression is that Laurent Tapie is trying to find as many ways as possible to relaunch Full Tilt Poker without risking any of his own money. If the majority of players agree to a staggered payout structure over a year, this would enable the company to start drawing income from rake without having to commit $300 million most observers believed would be required in order for Full Tilt Poker to regain its operating license. It also implies that player´s funds will not be segregated from the operating expenses of the company!

Where Did They get The Telephone Numbers From?

The fact that these media companies are only ringing ex-Full Tilt Poker players who had substantial balances on the site means that they must already have access to the Full Tilt Poker database. Apparently a few players have been contacted in Canada, but none in the United States – implying that Groupe Bernard Tapie has either no immediate interest in repaying the debt owed to American online poker players, or it could be an issue that is put on the shelf until the Rest of the World is up and running again.

Any number of conclusions can be drawn from this “canvassing” operation. Clearly Groupe Bernard Tapie are adverse to investing money into a discredited online poker company which is just going to be swallowed up by withdrawals, and want to give the impression (to the DoJ/AGCC?) that players will want to continue using the site when it is operational again – and that they are not too bothered about getting their hands on the money which is owed to them immediately.