A statement released yesterday effectively killed off all hope of Full Tilt Poker players seeing the money owed to them by the company this side of Christmas. 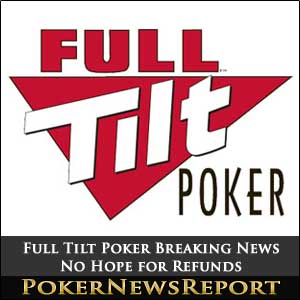 You Don´t Need to Read Too Closely Between the Lines!

You don´t need to read too closely between the lines to assume that the “exclusive investor” has pulled out of negotiations, especially as it was revealed earlier this week that the alleged investor (nobody knows if he really exists!) had entered into discussions with the United States Depart of Justice in respect of settling the outstanding lawsuits in the States. It would appear that he was not happy with what he was told by the DoJ!

What Are They Investing Into?

Full Tilt Poker – through one of their many attorneys, Jeff Ifrah – maintains that “repayment is the primary target”, in which case the question which needs to be answered is “What are they – the “additional potential investors” – investing into?” With poker players worldwide losing any remaining confidence in the brand with every passing day, who is going to remain a loyal Full Tilt Poker player when there are many more creditable [geolink href=”https://www.pokernewsreport.com/online-poker-rooms”]poker rooms[/geolink] willing to provide an online poker alternative.

Another AGCC Extension is the Plan

Full Tilt Poker players will also be disappointed in the wording of Jeff Ifrah´s statement when it came to discussing the rescheduled hearing with the Alderney Gambling Control Commission on September 15th. “Everyone has their eye on that date” stated Ifrah “Nobody wants to come to September 15th and not have a deal which is either finalised or close to finalisation to the point that it can be shared with Alderney and result in the extension of that date.”

An Apology Is Just Not Good Enough

The conclusion of the Pocket Kings statement offered an apology for the lack of communication over the past six weeks, claiming that the company had been “grappling with unexpected … … legal and financial issues in the aftermath of Black Friday”. It stated that it would strive to have better communications with its customers going forward, where it could do so with jeopardising future opportunities.

The statements by Pocket Kings and Jeff Ifrah, together with the recent resignation of the company´s chief marketing officer, Lothar Rentschler, could lead even the most optimistic FTP player to conclude:-