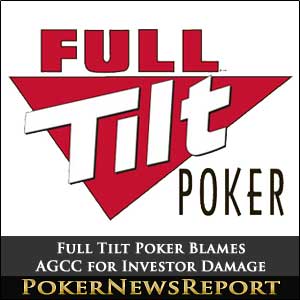 Claiming that the Commission had shown disregard to its players, the company (who stole hundreds of millions from the players and then lied about it) accused the AGCC of making it more difficult to execute the sale of the company and therefore repay its ex-players.

The truth of the matter is that Full Tilt Poker requested another thirty day extension to the licence suspension at the AGCC hearing on 19th September, after the Commission heard testimony from an alleged investor that negotiations for the purchase of the company were at an advanced stage. When the Commission refused to grant their wishes, the legal representatives of Full Tilt Poker threatened that if the extension was not granted they would not participate in the hearing. The AGCC bared their teeth for once and told them where to go and then investigated the 25 violations of their operating license which was responsible for the Full Tilt Poker shutdown back on June 29.

Within the Notice of Determination issued by the AGCC, it quite clearly states that once Full Tilt Poker satisfies the commission that the criteria for operating within their regulations are satisfied, the license can be reinstated. However, in a pathetic attempt to deflect blame for the theft of player´s bankrolls, Full Tilt Poker have attacked the AGCC rather than thanking them for allowing the company an opportunity to operate in the future.

The Full text of the Full Tilt Poker Statement

Throughout the last few months, Full Tilt Poker has been totally committed to ensuring repayment of its players in full — a commitment that it has expressed repeatedly to the Commission and the company believed that it was engaged in a collaborative effort with the Commission to repay its players.

Notwithstanding the potential damage done by the Commission and its disregard for our players, Full Tilt Poker remains committed to repaying its players in full and continues in active negotiations. A further statement will follow shortly.”